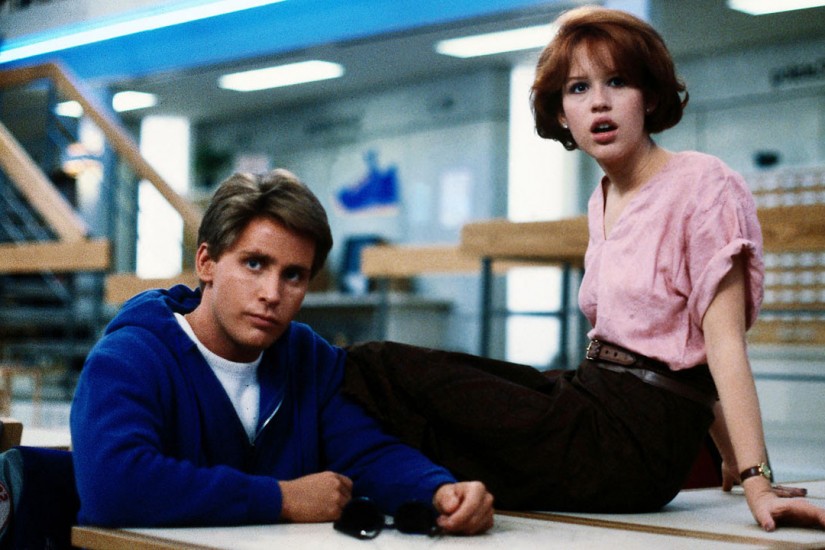 Molly Ringwald and Emilio Estevez in a scene from The Breakfast Club (1985).
…

It’s a strange experience, watching a younger, more innocent version of yourself onscreen. It’s stranger still—surreal, even—watching it with your child when she is much closer in age to that version of yourself than you are. My friend was right: my daughter didn’t really seem to register most of the sex stuff, though she did audibly gasp when she thought I had showed my underwear. At one point in the film, the bad-boy character, John Bender, ducks under the table where my character, Claire, is sitting, to hide from a teacher. While there, he takes the opportunity to peek under Claire’s skirt and, though the audience doesn’t see, it is implied that he touches her inappropriately. I was quick to point out to my daughter that the person in the underwear wasn’t really me, though that clarification seemed inconsequential. We kept watching, and, despite my best intentions to give context to the uncomfortable bits, I didn’t elaborate on what might have gone on under the table. She expressed no curiosity in anything sexual, so I decided to follow her lead, and discuss what seemed to resonate with her more. Maybe I just chickened out.

But I kept thinking about that scene. I thought about it again this past fall, after a number of women came forward with sexual-assault accusations against the producer Harvey Weinstein, and the #MeToo movement gathered steam. If attitudes toward female subjugation are systemic, and I believe that they are, it stands to reason that the art we consume and sanction plays some part in reinforcing those same attitudes. I made three movies with John Hughes; when they were released, they made enough of a cultural impact to land me on the cover of Time magazine and to get Hughes hailed as a genius. His critical reputation has only grown since he died, in 2009, at the age of fifty-nine. Hughes’s films play constantly on television and are even taught in schools. There is still so much that I love in them, but lately I have felt the need to examine the role that these movies have played in our cultural life: where they came from, and what they might mean now. When my daughter proposed watching “The Breakfast Club” together, I had hesitated, not knowing how she would react: if she would understand the film or if she would even like it.