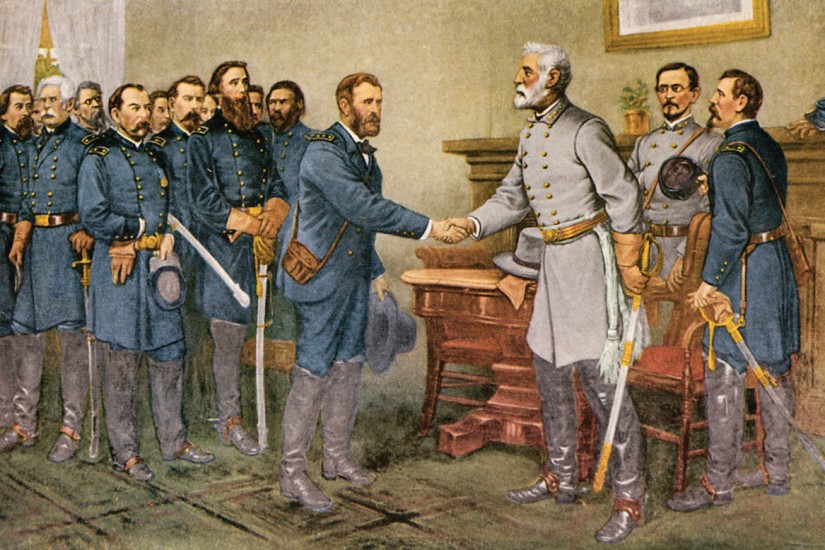 The very word “Appomattox” would settle into American memory and parlance as a prime marker of historical time, as a flashbulb memory (people would always remember where they were when they heard the news), as a divider between a world before and a world after “the war.” Among former slaves it would emerge as “The Surrender,” the beginning of a new calendar of time. Much had ended and much had begun in what one of its greatest chroniclers, Bruce Catton, called “the enormous silence” at Appomattox in April, 1865.

Yet Appomattox was not the end of the war. Three more military surrenders occurred over the next month and a half. On April 26, at a farmhouse called Bennett Place between Greensboro and Raleigh, North Carolina, Confederate General Joseph E. Johnston surrendered to Union General William Tecumseh Sherman. Further west in Alabama, on May 4, Confederate General Richard Taylor surrendered the remaining troops east of the Mississippi River. And finally, on May 26, in Arkansas, General Edmund Kirby Smith surrendered the remainder of a Confederate trans-Mississippi army. Formally, the hostilities were over; the affair of arms and exhausted soldiers, indeed the dying, seemed at an end.

But these apparently conclusive and clean surrenders masked the difficult and conflicted post-war era that would follow. The war ended with revolutionary and lasting results that echo down to the present day—especially in the two broad questions of racial equality and federalism. A great deal of American political, constitutional, and social history can be read through these two broad, likely eternal challenges.

The “Union,” and all that it meant to northerners as a kind of shield for liberal democracy against oligarchy and aristocracy, survived. It was transformed through blood and reimagined for later generations. The first American republic, created out of revolution in the late 18th century, was in effect destroyed. A new, second republic took its place, given a violent birth in the emancipation of four million slaves and the re-crafting of the U. S. Constitution in the 13th, 14th, and 15th Amendments. Those Amendments—ending legal slavery forever, sanctifying birthright citizenship and establishing “equal protection of the law,” and creating black male suffrage—in effect re-made the United States Constitution. This comprised a second American revolution.