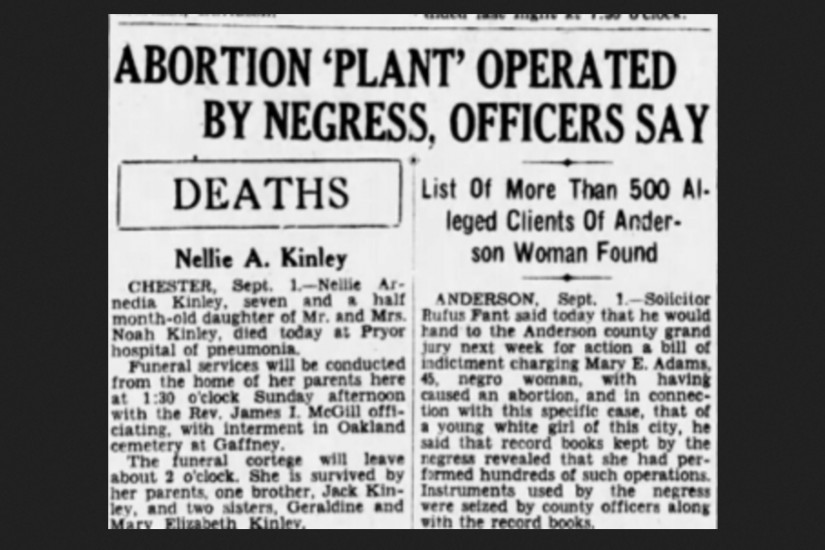 “Charleston was the place to come before Roe v. Wade, for abortions.”

Reminiscing about illegal abortion in South Carolina in the 1960s and early 1970s, this woman in her 60s, an oral history narrator, highlighted the roles of “backstreet” abortion networks in Charleston. She also told a story about a college friend who needed an abortion:

Because the medical university was here. Residents and interns would perform what we would call “No-Tell Motel” abortions….We came down for Citadel football and it was parents weekend or it was some kind of big weekend. And a girl who lived down my hall who was a senior had been dating a cadet, they were going to get married, she was in Charleston every chance she got. But that weekend or that Wednesday she came and asked if there was room in my car to come to Charleston and I said yeah….. We didn’t see ‘em at the parades, the Friday afternoon parade. We didn’t see ‘em at the football game Saturday. Sunday, when we were leaving to come back, all of us were there with our dates or whatever. She showed up and she looked God-awful, and we just thought, “Oh my god they had major fights,” because she had cried so much that her eyes were almost, she could see out of ‘em but you obviously knew she’d been crying. She said nothing on the way back to school… And we didn’t say an awful lot because we didn’t know what had gone on. Get back in and 3 o’clock the next morning, there’s a pounding on the room door across the hall from us …This girl was hemorrhaging. And I remember going into her room and looking at her and she’s lying on the bed and the bed is full of blood. She’d had an abortion, she’d gone up to Rivers Avenue [in North Charleston], to one of the motels.

This narrative was collected in 2016 by researchers from College of Charleston’s Women’s Health Research Team (WHRT), an interdisciplinary group of students and faculty that investigates health issues in order to empower women and girls in South Carolina and beyond.