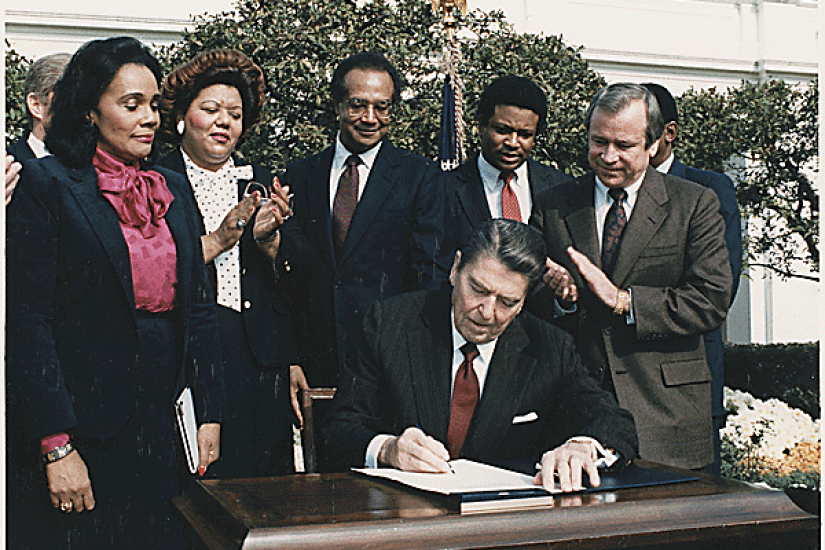 On Martin Luther King, Jr., Day in 2016, then–presidential candidate Donald Trump gave a stump speech at the arch-conservative Liberty University in Lynchburg, Virginia. Ostensibly invited to join in Liberty’s celebration of King, Trump made only a singular reference to the civil rights icon, to whom he credited the event’s record-breaking attendance. Trump then launching into his standard repertoire of self-congratulatory bloviation, which he followed with a presentation of a number of policy positions inconsistent with King’s work, including a bigger military, a stronger Second Amendment, and special civil rights for Christians.

Though alluring, it would be folly to argue that Trump has uniquely debased or elided the ideas, values, and teachings of King. As the history of the federal MLK Day holiday demonstrates, the destruction of King’s legacy and the reframing of King’s words to serve the interests of civil rights opponents began over three decades ago. In fact, Trump’s election represents one logical endpoint of the tactic exemplified by MLK Day itself, legislated under the Reagan administration as part of a strategy to defang King of his most radical qualities while coopting him into the ideology of colorblindness.

The inaccurate conflation of King’s activism with the ideology of colorblindness—in which ignoring race is positioned as the only way to end racism—began in earnest during the Reagan administration. Reagan, who thought little of King, ultimately used the creation of a national holiday honoring King as a way to coopt his legacy, enabling Reagan ironically to oppose key civil rights laws in the name of aligning himself with King’s supposedly colorblind dream. In so doing, Reagan became one of the most successful proselytes of what sociologist Eduardo Bonilla-Silva terms “colorblind racism,” and Reagan’s frequent citation of King marked the beatification of King not as a champion of racial justice but of colorblind ideology.