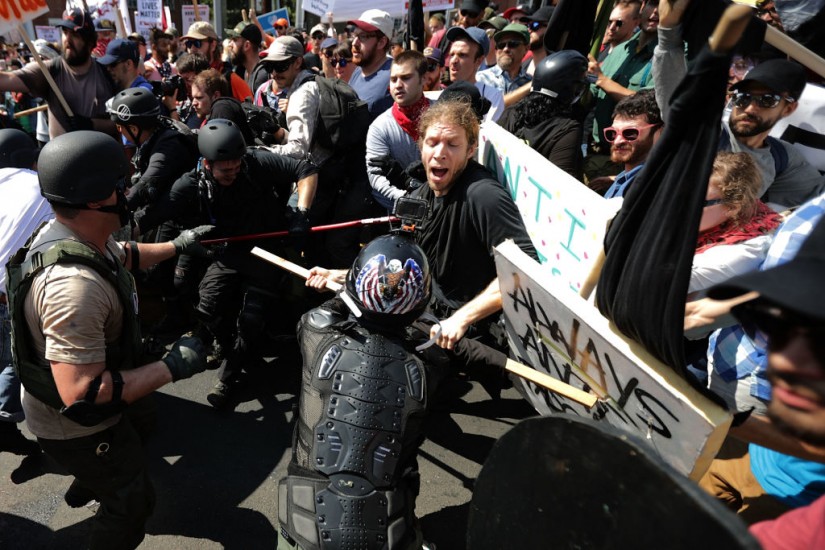 White nationalists, neo-Nazis and members of the 'alt-right' clash with counter-protesters at the Unite the Right rally August 12, 2017 in Charlottesville, VA.
Chip Somodevilla/Getty Images
…

Sean Illing
The core claim of this book is that the modern “white power” movement really began as a response to the aftermath of the Vietnam War. What happened?

Kathleen Belew
It helps to explain how I came to this project. I was researching truth and reconciliation commissions and came upon one in the aftermath of an incident in Greensboro, North Carolina, in 1979, where a caravan of neo-Nazis and Klan gunmen opened fire on a leftist demonstration and killed five people, four of whom were card-carrying members of the Communist Party. One of the shooters said at the truth commission in 2005 that he killed communists in Vietnam, so “why shouldn’t I kill communists here?”

This represented a profound shift to me. It’s a collapse of all kinds of different distinctions that we like to think about. It collapses war and home. It collapses enemy and fellow civilian. It collapses different kinds of enemies, and it also collapses time. There’s no peacetime and wartime; it’s perpetual war. And the more I researched this movement, the more ideas like this kept emerging.

Sean Illing
Obviously racism isn’t new in this country, so what was the binding narrative after Vietnam that brought all these elements together?

Kathleen Belew
A lot of these groups were at odds with each other for various reasons, but the narrative of Vietnam was that it was an act of betrayal. They believed the government and the politicians betrayed them. The culture was deeply split by Vietnam, and that gap was never really bridged. So these racist groups took a revolutionary turn and united around the idea of toppling the government.

At the same time, you had all these people with military training who were desensitized to violence and full of rage and hatred. So they obtained weapons they knew how to use, started a network of paramilitary camps, and reframed their struggle as a broader race war against the United States. It’s out of this environment that you get someone like Timothy McVeigh, who bombed a federal building in Oklahoma City in 1995.

Sean Illing
To be clear, you’re not arguing that the Vietnam War turned people into racists or made the country more racist than it already was. You’re saying it created the cultural conditions that galvanized these racist groups and helped them organize around a common cause.