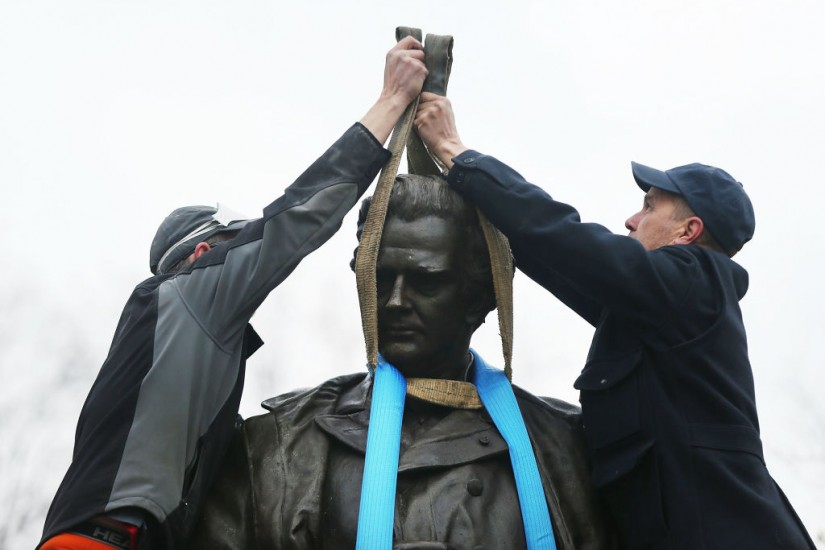 Today, New York City’s Public Design Commission accepted a recommendation from the mayor’s office to move the statue of Dr. J. Marion Sims, who made medical advances by performing experimental surgeries on female slaves without anesthesia or consent during the 19th century, from Central Park to Green-Wood Cemetery in Brooklyn. Relocation will begin Tuesday at 8AM.

Last August, a grisly photo showing four black women protesters with red paint splattered across their hospital gowns in front of the memorial to the man known as the “father of modern gynecology” went viral, and an online petition for its removal garnered more than 26,000 signatures.

One of the people who testified today in support of removing the statue was Kathleen O’Donnell, the senior vice president of the New York Academy of Medicine. She told the commission that while Sims’ actions “need to be acknowledged and accounted for in the history books, we should reserve public honors such as statues and markers for those in health and medicine who have made achievements without infringing on the civil and human rights of others.”

According to a report released in January, a mayoral commission found that “especially in its current location, the Sims monument has come to represent a legacy of oppressive and abusive practices on bodies that were seen as subjugated, subordinate, and exploitable in service to his fame.” The authors recommended relocating the statue, but leaving the engraved pedestal and adding an explanatory plaque to it and the statue in its new home; they also called for commissioning new work for the pedestal that would reflect the issues raised by the controversy.