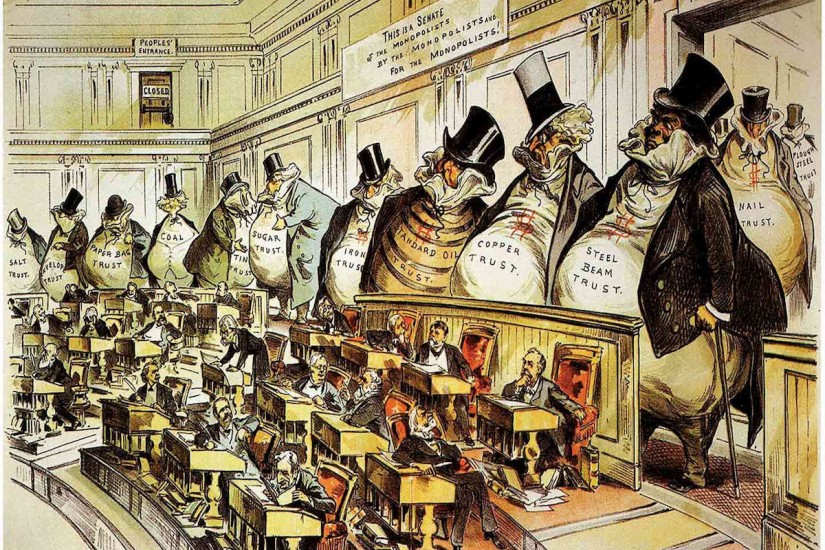 Joseph Keppler, The Bosses of the Senate (1889).
Public Domain

The Gilded Age, as Mark Twain enduringly described it, sticks out like a sore thumb on the American historical landscape. It is a symbol of corruption, greed, extravagance, and exploitation, of a country gone wild with excess. It also serves as a yardstick to measure the indiscretions and inequalities of subsequent times, not least our own. Still, the Gilded Age has never received the scholarly attention lavished on Reconstruction or the Progressive era—the periods before and after—though it is generally attached to the latter as a way of explaining the eventual swing toward a long period of reform.

Richard White takes another approach. In his impressive new book The Republic for Which It Stands, the latest volume in the ongoing “Oxford History of the United States,” White links the Gilded Age with Reconstruction—the two “gestated together,” he writes—and, in so doing, casts both in a different light while raising new questions about a nation born in the cauldron of civil war. Indeed, there’s a sense in which White has the Gilded Age effectively encompass the Reconstruction era; both periods, he argues, were defined by ongoing, and often explosive, struggles over the fundamentals of society and state in postbellum America: Who would rule and be ruled, whose vision of political economy and social relations would prevail, and who would pay the price? White thus speaks of the “twins” that were conceived in 1865. The first was “the world [that Americans] anticipated emerging from the Civil War,” which “died before being born”; the second “lived” but was “forever haunted by its sibling.” The book’s prologue, “Mourning Lincoln” (acknowledging an important study of the same name by Martha Hodes), makes the case for the larger social meaning of Lincoln’s assassination and sets the tone for the many pages that follow. The Republic for Which It Stands offers a sobering and generally dispiriting view of the nation’s contested road from the end of the Civil War to its emergence as an industrial-capitalist power by the turn of the 20th century.