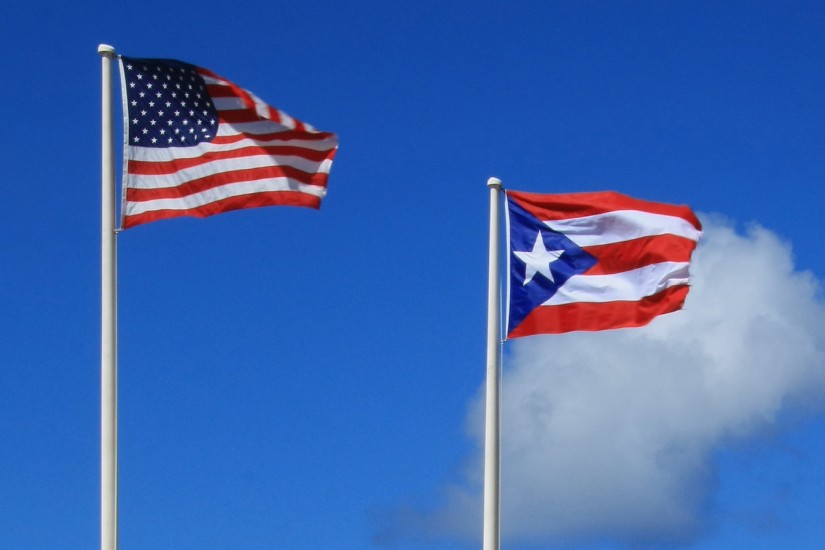 The flags of the United States and Puerto Rico in San Juan (2008).
flickr.com/arturodelabarrera

When the dust kicked up by Teddy Roosevelt’s Rough Riders settled and the USS Maine had been properly avenged, the Treaty of Paris—signed December 10, 1898—officially rid the Western Hemisphere of European powers and firmly established the United States as the dominant force in the region. The treaty gave control of Puerto Rico (along with Cuba, Guam, and the Philippines) to the United States, and made Uncle Sam the unquestioned authority in the Caribbean, with tight control over Puerto Rico’s trade and other affairs. That control did not really loosen, even after the Foraker Act in 1900 (that allowed Puerto Rico limited local government) or the 1917 Jones Act (that granted U.S. citizenship to Puerto Ricans).

2. A Party of Their Own: Partido Popular Democrático, 1938

The Partido Popular Democrático (PPD, Popular Democratic Party) was founded in 1938. Though it grew out of earlier movements either for statehood or for independence, it was largely concerned with making life better for Puerto Ricans. The PPD sought land and labor reform, appealing to the middle and rural working classes and saw gradual autonomy as its goal. Luis Muñoz Marín was the leader of the party. In a significant act of being a good neighbor, President Harry S. Truman called upon PPD member Jesus T. Pinero to be the first native-born governor of Puerto Rico in 1946. One year later, Puerto Rico gained limited self-government and in 1948 elected Marín to be governor. He served four terms.

3. Ties that Bind: Establishment of the Commonwealth of Puerto Rico, 1952

On July 3, 1950, President Truman signed a bill to make Puerto Rico a commonwealth. This meant that it would have autonomy in internal affairs while still adhering to U.S. laws. The U.S. maintained control of international affairs including trade, defense, immigration, and diplomacy. Eleven months later, Puerto Ricans voted overwhelmingly in favor of the Commonwealth Bill and delegates began drafting a Constitution. The Constitution of the Commonwealth of Puerto Rico was adopted in San Juan on March 3, 1952 and in Washington, D.C. on April 22, 1952.