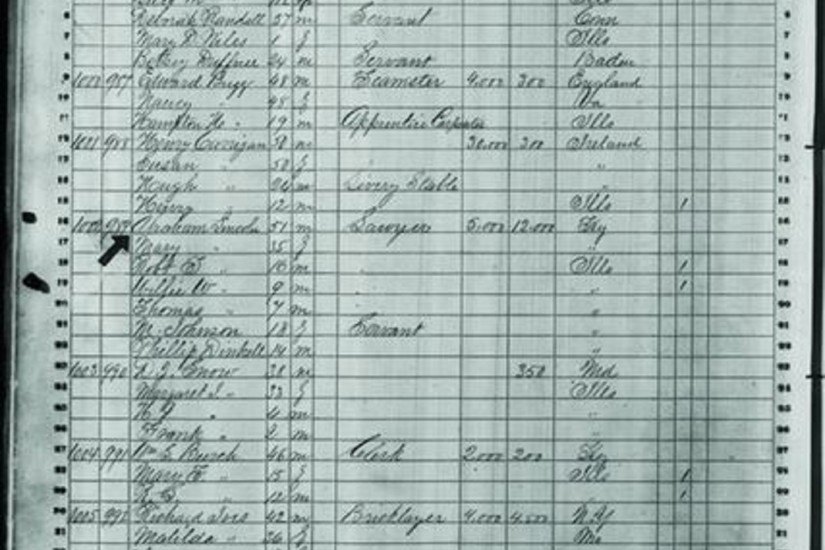 The 1860 census schedule for Springfield, Illinois, lists Abraham Lincoln (with arrow) living alongside a bricklayer, a stableowner, a teamster, and a secretary.
National Archives

Speaking in New Haven in 1860, Abraham Lincoln told an audience, “I am not ashamed to confess that 25 years ago I was a hired laborer, mauling rails, at work on a flat-boat—just what might happen to any poor man’s son.” After his death, Lincoln’s personal trajectory from log cabin to White House emerged as the ideal American symbol. Anything was possible for those who strived.

Not only was great wealth an aberration in Lincoln’s time, but even the idea that the accumulation of great riches was the point of a working life seemed foreign. Whereas today the most well-off frequently argue that riches are the reward of hard work, in the Civil War era, the reward was a “competency,” what the late historian Alan Dawley described as the ability to support a family and have enough in reserve to sustain it through hard times at an accustomed level of prosperity. When, through effort or luck, a person amassed not only a competency but enough to support himself and his family for his lifetime, he very often retired. Philip Scranton, an industrial historian, writes of one representative case: Charles Schofield, a successful textile manufacturer in Philadelphia who, in 1863, sold his interest in his firm for $40,000 and “retired with a competency.” Schofield, who was all of 29 years old, considered himself “opulent enough.” The idea of having enough frequently trumped the ambition for endless accumulation.