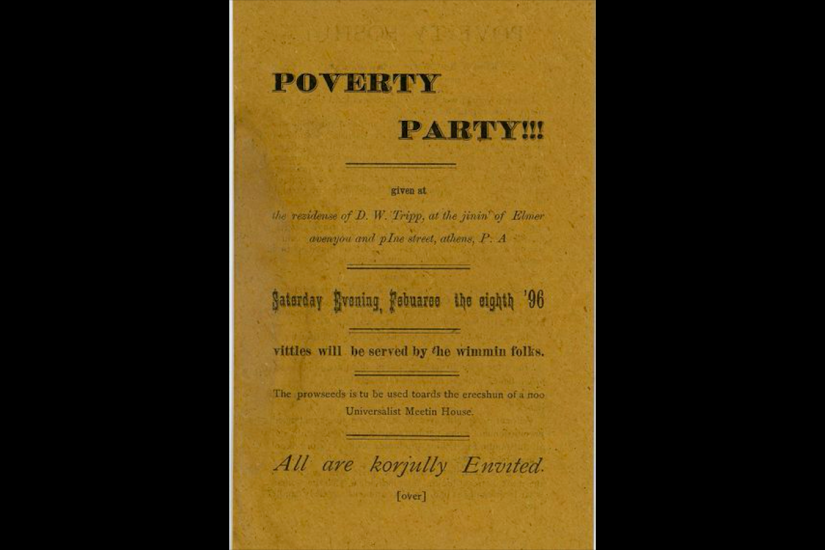 This invitation, to a “Poverty Party,” asked guests to come to the home of D.W. Tripp in Athens, Pennsylvania, in February 1896. Held at the tail end of the Gilded Age, this “POVErTY SOSHUL” promised “yellocutin, speakin peaces and singin songs,” and a prize for “the most disreast lookin man individual, also ths woman what look ekally as bad.” The proceeds of the party would go to “the erecshun of a noo Universalist Meetin House.” This invitation, sent at a time of great income inequality, when the suffering of immigrants in cities and black Americans in the post-Reconstruction South was particularly acute, shows how some people in the middle and upper classes of the Gilded Age regarded the poor they lived alongside.

From the dialect used on the invitations, to the plain food served at the event, a poverty party established social distance between the celebrants and the lower classes whose shoes they were stepping into for a night. “Mush and milk was served in tin cups with tin spoons,” Mrs. Herbert B. Linscott wrote of one poverty party in her 1905 book Bright Ideas for Entertaining, adding a parenthetical—“borrowed for the party”—to make sure you know that she doesn’t expect her readers to actually own tinware. A 1907 book on entertaining by Ellye Howell Glover recommended that a “poverty party” should offer “corn meal mush in crockery bowls, served with a bountiful supply of cream and sugar, brown and white bread sandwiches, apple and pumpkin pies, coffee in tin cups, doughnuts, and cookies”—on a table set with no tablecloth, and decorated only with paper napkins and flowers.

These occasions allowed rich and middle-class people to dress down and enjoy it. Linscott’s suggested invitation included rules for party garb: “Every womin what kums must ware a Poverty dress and apern, er something ekelly erpropriate, an leave her poodle dorg to hum.” (I know, this stuff is hard to read. But these invitations are such interesting ephemeral examples of the Gilded Age’s passion for the use of “humorous,” “colorful” dialect in literature; I must include it.) D.W. Tripp’s 1896 invitation, side two.

At fundraisers, like the one Tripp threw, hosts imposed fines on those who came dressed with excessive fanciness. The Chester Methodist Episcopal Church of Chester, New York, in an invitation for a poverty party in 1900, announced that men would be fined for coming with “oiled hair or wacksed mustash,” “sigars in pocket,” or if they were “karrying a kane.” Women would be fined for wearing a “wool dress,” a “hat with flours or fethers,” or a “boka” (bouquet).