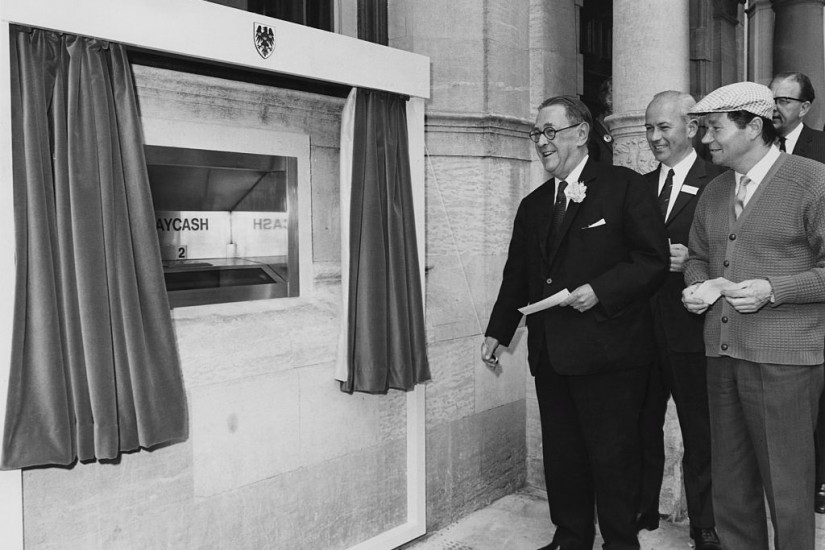 In spite of their cultural significance, ATMs recede into the noise of everyday memory. Few stop to reflect on how they—and the computer infrastructure that supports them—became the backbone of contemporary retail payments.

The cash dispenser was born almost 50 years ago, in 1967. For many, this was the first tangible evidence that retail banking was changing; the introduction of the ATM marked the dawn of contemporary digital banking. Several lay claim to the invention of the cashpoint, including John Shepherd-Barron and James Goodfellow in the U.K.; Don Wetzeland Luther Simjian in the U.S.; and even engineering companies like De La Rue, Speytec-Burroughs, Asea-Metior, and Omron Tateisi. But the ATM is a complex technology. There was no single eureka moment that marked its arrival.

The ATM finds its origins in the 1950s and 1960s, when self-service gas stations, supermarkets, automated public-transportation ticketing, and candy dispensers were popularized. The first cash machine seems to have been deployed in Japan in the mid-1960s, according to a Pacific Stars and Stripes account at the time, but little has been published about it since. The most successful early deployments took place in Europe, where bankers responded to increasing unionization and rising labor costs by soliciting engineers to develop a solution for after-hours cash distribution. This resulted in three independent efforts, each of which entered use in 1967: the Bankomat in Sweden, and the Barclaycash and Chubb MD2 in the U.K.

Cashpoints materialized thanks to a long chain of innovations. Some were of a general nature, such as steel, video-display units, plastic, magnetic tape, or (more recently) the Windows operating system. Others were purpose-made, such as the cash output mechanism and, in the 1960s, the previously non-existent algorithm that associated an encrypted PIN with a customer account. These components were developed through active collaboration between groups of bankers and engineers, each of which attempted to solve different aspects of the complex challenges inherent in the development of the ATM.