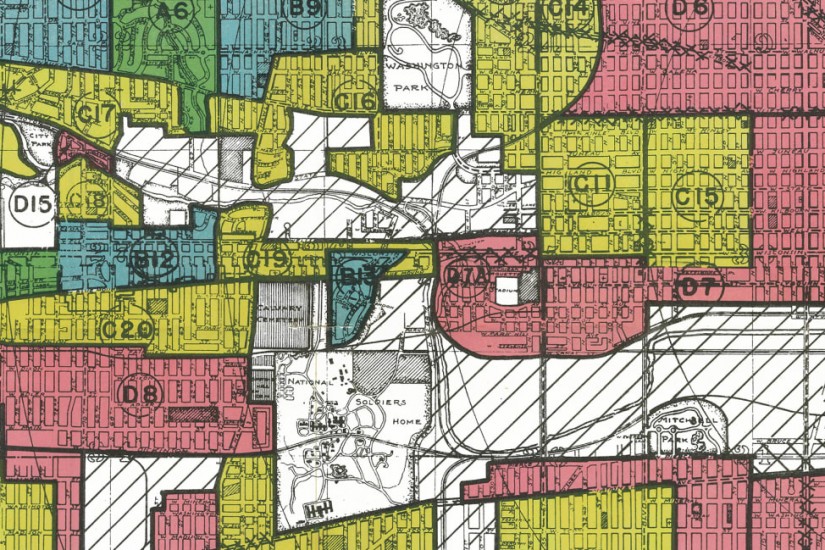 The so-called redlining maps were used in cities throughout the U.S., part of blatantly racist New Deal policies: As the government tried to rebuild the housing market after the Great Depression and prevent foreclosures, an agency called the Home Owners’ Loan Corporation asked local realtors and assessors to give neighborhoods in more than 200 cities grades of “best,” “desirable,” “declining,” or “hazardous,” quantifying the number of black and foreign-born people living there. The lower the grade, the less likely someone could get a loan from a bank to buy a house; in a redlined neighborhood, it could be nearly impossible.

Historians disagree about how the HOLC maps were used, though there is evidence that they were used by private lenders and also may have influenced Federal Housing Administration maps. If the FHA didn’t approve a loan, that could effectively kill it. This type of discrimination was outlawed in 1968 with the Fair Housing Act, though in practice, it still sometimes occurs.

On a weekend in February, a group of mostly white Milwaukeeans boarded a school bus to take a tour through some of the former redlined neighborhoods. “We grew up in this city, and hopefully we can provide some real personal information around redlining,” says Joaquin Altoro, one of the organizers of the tour.

Altoro, whose day job is as vice president of commercial banking at a local bank, is the grandchild of a man who came to Milwaukee from Mexico in the early 1900s to work at a tannery. As Altoro and co-organizer Adam Carr researched the history of redlining in Milwaukee, they discovered the notes for the neighborhood where Altoro’s grandfather bought his first house. “Mexicans are encroaching in the Northeast,” it said.

“The words that were used were crazy,” he says. “I’m standing here at the house where my grandfather came, looking at the map and the notes, and I promise you, this is a direct correlation to my grandfather being one of the first Mexicans.”

The tour stopped at places like Columbia Savings and Loan, the first black-owned bank in the city, which helped black residents get loans that weren’t available elsewhere, and talked about the history of the city’s black neighborhoods. At another stop, the group met with a black developer who is turning a vacant building into a startup incubator.