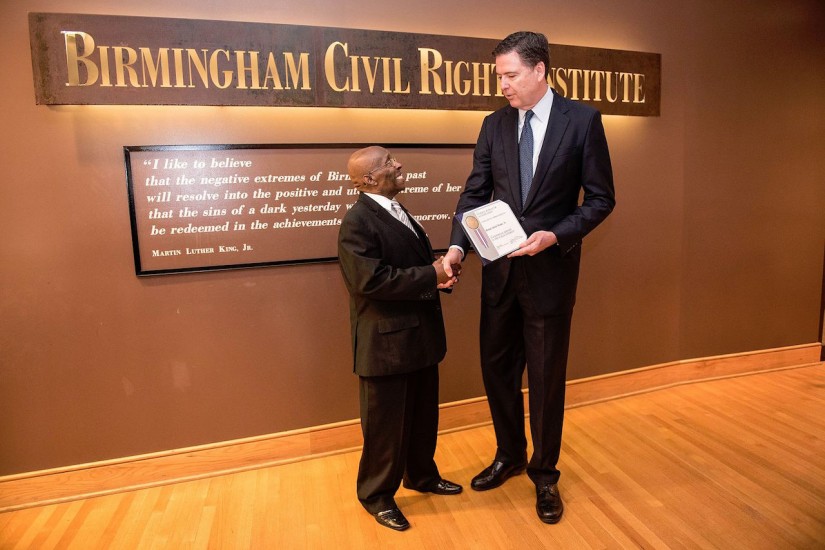 James Comey receives a certificate at the Birmingham Civil Rights Institute, May 2016.
Federal Bureau of Investigation
…

The history reveals the contingent and political definitions of “national security” and “extremists,” a point King actually makes in “Letter from a Birmingham Jail,” which Comey claims to love. The fears of communist subversion that provided justification for mass surveillance of black communities, as well as claims of “new urgency,” are replicated in the fears of terrorism that justify counter-radicalization efforts and the widespread monitoring of Muslim communities today.

When Comey became head of the FBI, he condoned a similar set of racialized, rights-abusing practices, including widespread, warrantless surveillance of American citizens, despite warnings from top-level bureau officials. In particular, the harassment and targeting of Muslim Americans, particularly Muslims who express dissenting views, in post-9/11 America has paralleled the civil rights era, as the intimacies of Muslim life — from worship to family time to community organizations to student activities — came under persistent scrutiny. Comey maintained and at times amplified that tact. The FBI now has 15,000 informants, mostly tasked with surveilling the Muslim community — up from 1,500 when Congress began its hearings on COINTELPRO in 1974.

FBI agents are instructed to target Muslim student associations, listen for so-called un-American or critical speech, and identify young people who are becoming more religious. “Since we’re looking for young people re-engaging with their Islamic faith, the local MSA” — Muslim Students Association — “is a great place to start,” instructed one FBI training presentation.

Indeed, under Comey’s leadership, the FBI expanded the practice of using undercover informants to surveil Muslim communities, preying on the weak, the poor, and the mentally ill to bolster the rosters of arrests, in order to demonstrate the effectiveness of domestic counterterrorism efforts. He allowed agents to ramp up pressure on Muslim Americans to become informants, and endorsed the practice of undercover FBI agents posing as members of the news media. The bureau brought pressure to bear in the name of cultivating informants — putting people on the “no-fly” list when they refused — and also scraped vulnerable data, gathered by Customs and Border Patrol, on immigrants entering the country to use in recruiting informants

Even as he claimed to want to diversify the bureau, Comey approved the surveillance of Muslim analysts: “Of course, we must also discharge our duty to apply appropriate scrutiny when folks have significant foreign national contacts or contacts of concern with subject [sic] of criminal, counter-intelligence or counter-terrorism cases, by virtual of [sic] family friends or travel.”