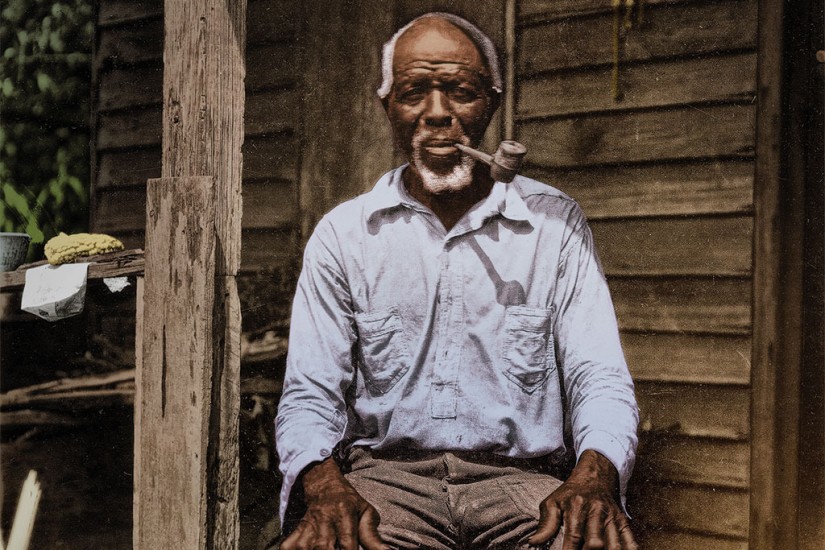 After a three-day forced march, the party arrived at the coast; Cudjo had never seen the ocean before.

When we git in de place dey put us in a barracoon behind a big white house and dey feed us some rice. We see many ships in de sea, but we cain see so good ’cause de white house, it ’tween us and de sea. But Cudjo see de white men, and dass somethin’ he ain’ never seen befo’.

De barracoon we in ain’ de only slave pen at the place. Sometime we holler back and forth and find out where each other come from. But each nation in a barracoon by itself. We not so sad now, and we all young folks so we play game and clam up de side de barracoon so we see whut goin’ on outside.

When we dere three weeks a white man come in de barracoon wid two men of de Dahomey. Dey make everybody stand in a ring. Den de white man lookee and lookee. He lookee hard at de skin and de feet and de legs and in de mouth. Den he choose. Every time he choose a man he choose a woman. He take sixty-five men wid a woman for each man. Den de white man go way. But de people of Dahomey come bring us lot of grub for us to eatee ’cause dey say we goin’ leave dere. We eatee de big feast. Den we cry, we sad ’cause we doan want to leave the rest of our people in de barracoon. We all lonesome for our home. We doan know whut goin’ become of us.

Dey come and tie us in de line and lead us round de big white house. Den we see so many ships. We see de white man dat buy us. I in de last boat go out. Dey almost leavee me on de shore.

As the slaves were being rowed out to the Clotilda, the ship’s captain began to suspect that the Dahomey were going to trick him and try to recapture the people he’d just bought, so he gave orders to “abandon the cargo not already on board, and to sail away with all speed.”