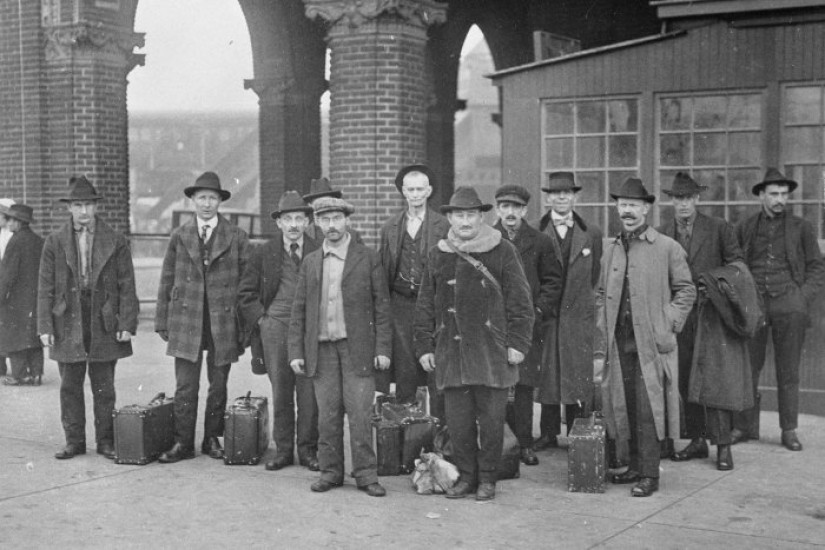 A group of Industrial Workers of the World members freed after 18 months detention on Ellis Island.
National Archives

Just before midnight on June 1, 1919, an Italian immigrant and anarchist named Carlo Valdinoci walked up the steps of the home of US Attorney General A. Mitchell Palmer, a noted opponent of radical politics and uncontrolled European immigration. In his hands, Valdinoci held a briefcase containing a homemade bomb. Valdinoci likely became the first suicide bomber in American history that night, dying as his package exploded prematurely, ripping apart both himself and Palmer’s stately home. Within three hours of this unprecedented attack, other bombs exploded simultaneously in Boston, New York, Philadelphia, and several other northeastern US cities, many at the homes or offices of prominent capitalists or political leaders. These attacks were quickly linked to an Italian anarchist group that had threatened American institutions. Amazingly, only three people died, including Valdinoci. Despite the relatively low impact of these attacks, they tapped into a strong undercurrent of xenophobia and fear: a culturally alien immigrant group suspected of radical political views and violent tendencies had struck spectacularly and widely. The gates, many believed, were undefended. More attacks seemed inevitable unless immigration was restricted – immediately, selectively, and severely.