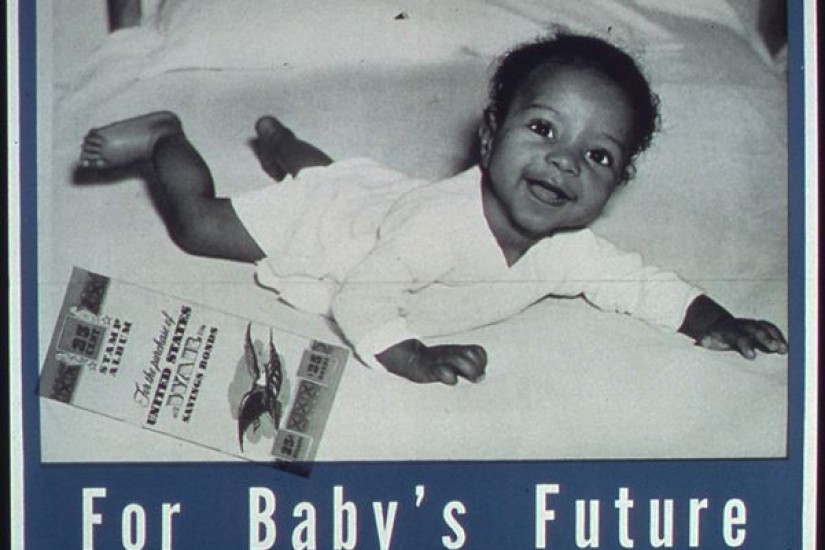 During World War 1 babies appeared in propaganda campaigns, shown being bayoneted by evil Germans. Babies didn’t just provoke patriotism, they got paid for their work serving as symbols of vulnerable innocence. The nation’s high infant mortality rate, which took a far greater toll in lives than the enemy on the battlefield, helped spur President Woodrow Wilson to announce that 1918 would be the “Children’s Year,” a joint effort of the United States Children’s Bureau and the Women’s Committee of the National Council of Defense. A key goal: “Save 100,000 Babies.” Without appearing at the White House or in the halls of Congress, infants (and children) got President Wilson to appropriate $150,000 for this effort from his War Emergency Fund.

During World War II babies once again got call-up notices. With centuries of experience selling all kinds of consumer goods — cigarettes, guns (Iver Johnson Revolvers, “Accidental discharge impossible” read the ad showing a toddler in a bed playing with one), billiard tables, and hair tonic, to name a few — babies soon went to work for the government. “I’m good and mad” declared an angry-faced baby in one advertisement. The text went on, “I’ve been hearing a lot about a couple of guys called Hitler and Hirohito.” What should people do to turn that angry (or should it be called weaponized) face into a cute smile? The answer was obvious: buy war bonds.

Just as babies leveraged government dollars in World War I, they got a bundle of cash in World War II by way of EMIC, the Emergency Maternity and Infant Care Act. Federal dollars paid for the births of babies whose fathers were in the four lowest pay grades in the military. From 1943 through 1946 Uncle Sam spent taxpayer money on one out of every seven births and on a year of infant health care for 1.5 million infants.

War, it seems, weaponizes babies, turning them into infant citizens who support the cause by serving as subjects of propaganda, promoters of patriotism, and sellers of bonds. It also makes them into the reasons soldiers and sailors fight, because they symbolize, and indeed are, the nation’s future. But that hasn’t happened lately, though not because of peace and prosperity.