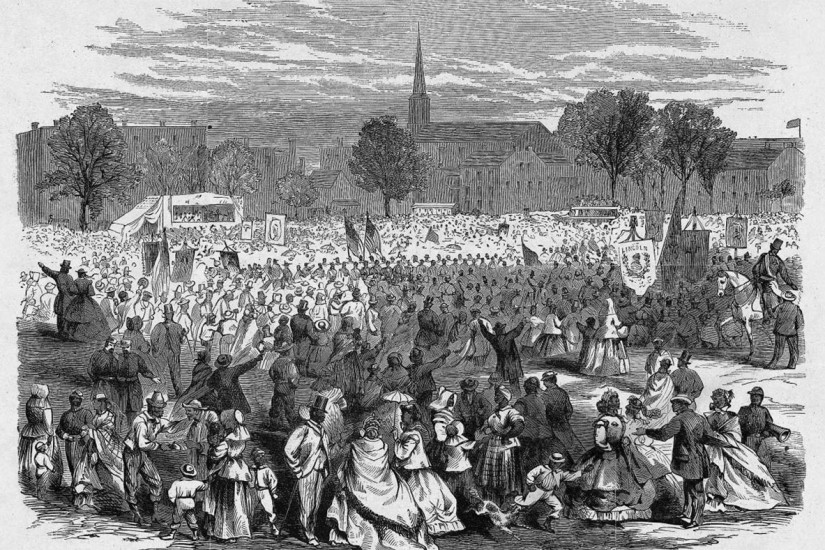 "Celebration of the Abolition of Slavery in the District of Columbia" by F. Dielman (1866).
F. Dielman/Library of Congress

With a stroke of his pen, President Abraham Lincoln signed into law the Compensated Emancipation Act on April 16, 1862, officially ending slavery in Washington, D.C. The Act reflected a new direction in the longstanding debate over slavery and emancipation in the nation’s capital. While a far cry from full emancipation, it was an important step towards the abolition of slavery.

The law ending slavery in the nation’s capital provided compensation for the owners of the roughly 3,185 slaves it freed. A three-person commission heard petitions of the former slave owners and made determinations on how much money they should receive for the loss of their human property. In the end, the total compensation amounted to nearly one million dollars. A second Compensation Act, which Lincoln signed into law on July 12, 1862, allowed former slaves to petition for reimbursement for their own value, so long as their former masters had not already been compensated. It also allowed former slaves who had purchased the freedom of family members to claim remuneration for the money they had spent to free loved ones. This corrected a flaw in the original Act. Under the original law, black claims were automatically discounted if challenged by a white petitioner. The revision required claims to be weighted equally, regardless of the petitioner’s race.

While a number of states had ended slavery well before it was outlawed in Washington, D.C., these particular acts of emancipation—especially the first one– carried a lot of symbolism. As the nation’s capital, Washington, D.C. was a critical center of nineteenth-century struggles between northerners and southerners over slavery.

At first, few white Americans questioned the institution of slavery in Washington, D.C. The growth of the city after its establishment in 1792 had called for considerable skilled and unskilled labor, and slaves had built more than a few of its buildings. The city was also central to the domestic slave trade. Until the middle of the nineteenth century, slave pens and auctions were a common sight. Hotels rented out basements for holding slaves prior to their sale, and local taverns and hotels around the National Mall frequently hosted slave auctions.