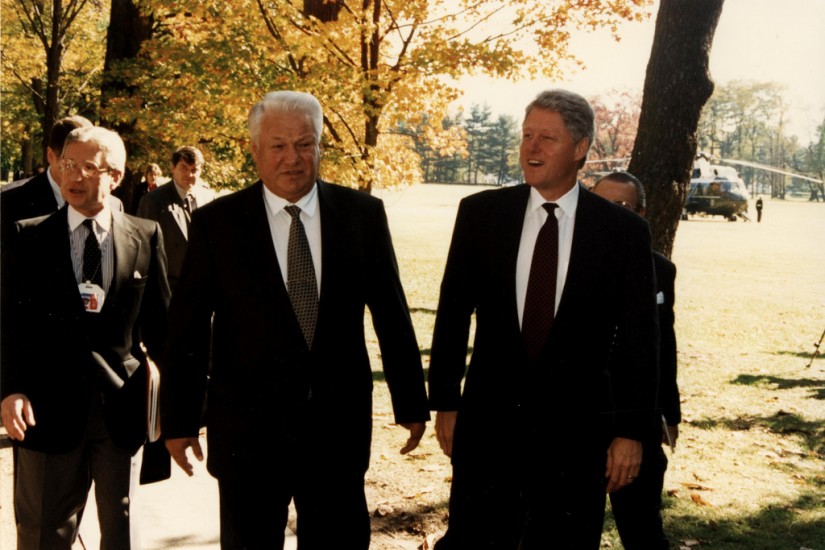 The 1990s were one of the most tumultuous and tragic periods in modern Russian history. In 1996, a chaotic mix of Russian schemes — from fraud and profiteering to old-fashioned conspiracy — worked to keep Yeltsin in the driver’s seat. Throughout, American players silently watched, facilitated, and at times, actively helped construct the Faustian bargain between Yeltsin and his oligarch supporters. This pact would have ruinous effects on Russia’s democracy and economy in the decades to come.

Indeed, the Americans supported Yeltsin in body and spirit, much to his and his backers’ delight. You don’t need to delve into conspiracy theories to see the United States’s hand, especially if you evaluate it according to the criteria used to assess Russia’s involvement in the American election last year.

That said, it’s striking that American influence in Russia was so openly acknowledged. The public record shows clear points of direct American coordination, collusion, and action in Yeltsin’s favor. One can only guess what the two nations’ archival records would reveal.What follows is not intended as a reminder of American hypocrisy or a gesture toward moral equivalence. All great powers engage in a little electoral meddling here and there. Rather, telling the story of American involvement in the 1996 Russian election helps us remember the history of relations between these two countries.

Ultimately, the United States interfered not to facilitate the will of the Russian people but to advance its foreign policy goals. “[W]e thought it was imperative that Yeltsin win, or that someone like Yeltsin win in June of 1996, in order to continue the reform process,” recalled Thomas Graham, the chief political analyst at the US embassy in Moscow in 1996. “This was a classic case of the ends justifying the means, and we did get the result that we wanted.”

While it seems unlikely that the memory of this “humiliation” motivated Putin to get revenge in 2016, it did remind the Russian people that American democratic mantras are often thinly disguised rhetoric that promote US power. The Putinists have deployed past interference — both real and imagined — to justify political repression, and they will certainly do so again as Russia approaches its 2018 presidential elections.