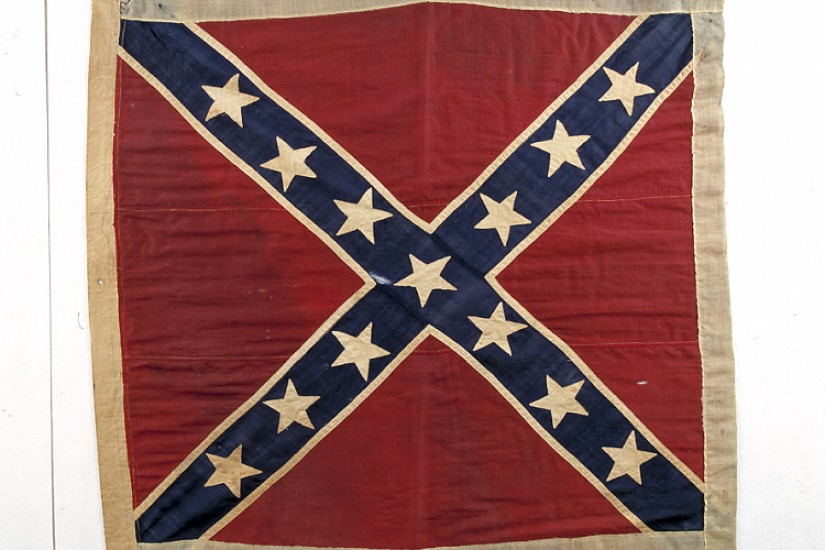 “Heritage, not Hate” is the familiar bumper sticker defense of the Confederate flag. It has evoked equally pithy responses, such as “Your Heritage is Hate” and “Heritage of Hate.”

A symbol derives meaning from its uses and the perceptions of those uses. In the 156+ years since its introduction, the Confederate flag – or, more accurately, modern reproductions and graphic representations of the flag – have had many uses and acquired many different meanings. Understanding the complex history of the flag is essential for understanding the debates about the flag today.

What we today call “the Confederate flag” (the star-studded blue diagonal cross on a field of red) was born as the battle flag of what became Gen. Robert E. Lee’s Army of Northern Virginia. Original wartime battle flags, therefore, are associated with the Confederate soldiers who carried them in battle.
The implicit link between soldiers and the nation that their service supported became explicit in May 1863 when the Confederate Congress approved a new national flag featuring the Army of Northern Virginia (ANV) battle flag. The soldier’s flag was also a political flag, associated with the independence of a nation dedicated (by the terms of its Constitution) to the defense and perpetuation of slavery.

In the decades after the death of the Confederacy itself, its flags – especially its most prominent battle flag – lived on.