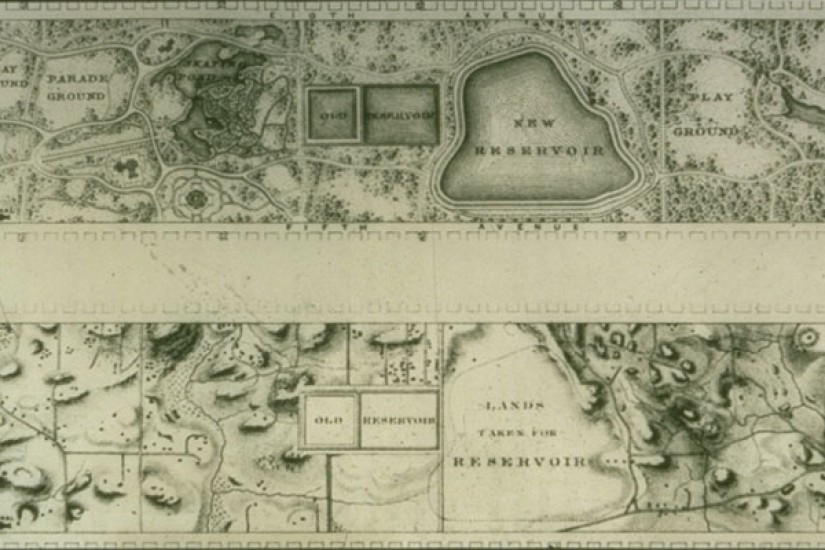 Wilderness could not be easily dropped into the middle of American cities, however. When Olmsted and Vaux entered a proposal for the design of Central Park, the “Greensward Plan,” their canvas was a desolate, rocky plot of more than 700 acres interrupted by swamps, steep ravines, and clay pits. The plot (later expanded to 840 acres) was occupied by several settlements, most prominently Seneca Village, one of the city’s few middle-class black communities. There were also graveyards, which were never exhumed.

Olmsted recalled that the Birkenhead site had not been in much better condition before that park’s creation—“a flat, sterile, clay farm.” In Central Park, Olmsted applied the lessons he had learned there, re-creating the winding paths, the variety of shrubs and flowers, the vast open meadows, the irregular clustering of trees. He developed a series of rules that he would follow in his subsequent projects, which included not only dozens of municipal parks but college campuses (Stanford, UC Berkeley, Gallaudet, Trinity College); private estates (George Vanderbilt’s Biltmore and John D. Rockefeller’s Kykuit); national sites (the grounds surrounding the U.S. Capitol, and Niagara Reservation, the country’s oldest state park); and Riverside, Illinois, one of the nation’s first planned suburbs. Olmsted’s success helped create not only a profession, but an aesthetic.

His first principle was that a park should complement the city to which it belongs. If a city is cramped, crowded, and rectilinear, its park should be composed of sinuous thoroughfares and a variable topography that includes large open spaces. The “comparative largeness” of Central Park was essential, since a park should “be a ground which invites, encourages & facilitates movement.” The giddy impulse you feel, upon arriving at the Great Lawn or Sheep Meadow, to burst into a full-out sprint—that is by design.

A park should also be faithful to the character of its natural terrain. It was in “bad taste,” for instance, to grow lawns in the arid western United States or palm trees in New England. Beauty was to be found not in decorative plants, as one might expect from a florist’s display window, but in general effects. Trees should be grouped in such a way that “their individual qualities would gradually merge harmoniously.”