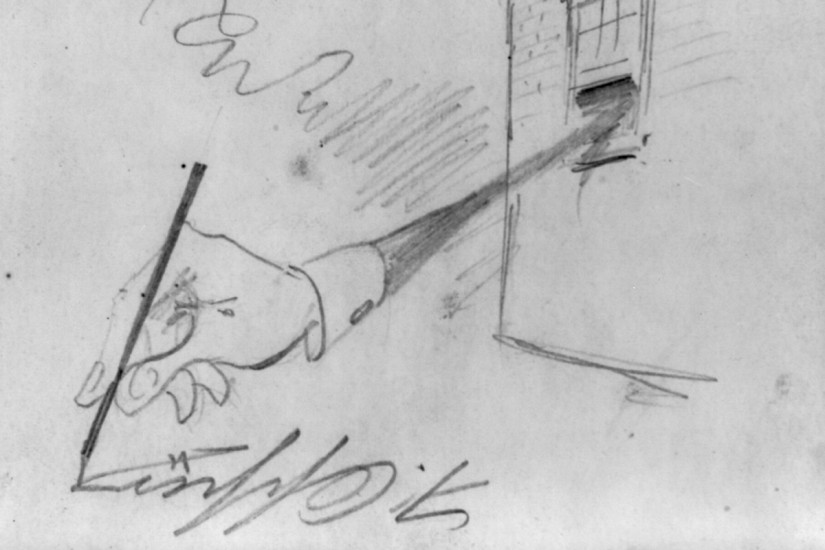 A cartoon by Frederick Opper of a hand extending from a window of the Puck building, writing the artist's signature (ca. 1881-1899).
Library of Congress

It’s the end of an era: Major credit card companies announced last month that they will no longer require signatures at the point of purchase. All those squiggles on carbon copies, on paper and now on touch screens will soon become history.

But we don’t have to worry about the death of the signature quite yet. That’s because, unlike typewriters, cassettes, VCRs or any of the other relics of the pre-digital age, signatures still carry a certain cachet, a power we can attribute to their long history as marks of personal authenticity.

The signature can powerfully evoke the presence of a person, living or dead, famous or family. In the 19th century, people collected signatures, first snipping them from letters and then visiting notable people to ask for signatures in person. Soon collectors were seeking out the carte de visite, a postcard that displayed a likeness and a signature, a predecessor to the signed glossy photograph of the Hollywood era. It was the best way to remember a brush with greatness, short of obtaining a lock of hair or a death mask (not easy items to acquire).

And indeed, the signature has transformative powers. What may have been the first commercial use of signatures turned a notorious clunker into a household item: the Merriam-Webster dictionary.

In 1853, George and Charles Merriam bought the rights to Noah Webster’s 1828 “American Dictionary of the English Language,” a landmark work of scholarship filled with extensive (if often erroneous) etymologies and Webster’s distinctive spelling innovations. Some have stuck — color for colour — but others have not — “alternativ,” for example.

The product of decades of work, Webster’s dictionary was 1,500 pages long and carried an exorbitant price tag of $6 (more than $170 in today’s dollars). Webster had wanted to create a landmark dictionary, and 10 years after his death, he got his wish — but not on the basis of his spelling, his scholarship, or his Enlightenment and Federalist ideals, as he had intended. The Merriam brothers abridged the work, threw out many of Webster’s spelling choices and deployed patriotism — and signatures — to market their version as a national standard.

In the years that followed, the Merriams sent copies of their new edition to noted politicians and thinkers — and then they clipped the signatures from the courtesy thank-you letters they received and used them in advertising for the dictionary.