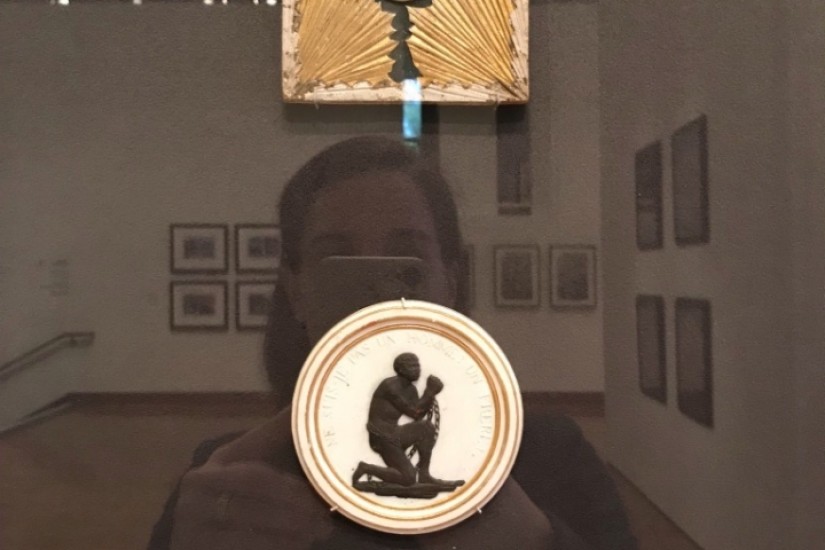 Author of this piece takes a photo of 18th century British antislavery medallions on display at the Princeton University Art Museum.
Hyperallergic

On previous visits to the Worcester Art Museum, I had paused to consider the reserved posture and elegant dress of Lucretia Chandler Murray; however, I had not ever considered where her wealth and privilege came from — until now. While the older museum label for the portrait had underscored the characteristic style of 18th-century painter John Singleton Copley (1738–1815) and pointed to his allusion to styles adopted by the British nobility, a new label now caught my eye. It informed me that Lucretia’s father owned two enslaved persons whom he later left in his will to family members. One was named Sylvia and the other Worcester. While Lucretia’s father and husband had the financial means to pay for Copley’s talents, their enslaved persons did not.

As the Worcester Art Museum (WAM) in Worcester, Mssachusetts is exploring, the signage that accompanies a piece of art is often the lens through which we view it. The WAM and some other US museums are exploring exhibit labels as an important means of contextualizing the wealthy patrons of art from the country’s past for a contemporary audience. For the WAM, that past includes portraits of men and women from both the North and the South depicted in antebellum art who either owned enslaved persons or benefited from the institution of slavery.

While wall labels in a museum’s permanent collection are often standardized, unchanging, and overlooked, curators at the WAM began to reconsider them in the wake of political and social shifts in the current era. Following the 2016 presidential election, Elizabeth Athens, a former curator of American art at WAM who is now a postdoctoral research associate at the Center for Advanced Study in the Visual Arts, began to see the galleries of American art differently.

“Honestly, the catalyst for the project was the 2016 presidential election,” she explained. “While I had already been exploring ways to make the museum’s American portrait galleries more relevant to contemporary viewers, after the election I found them almost unethical in the way the labels sidestepped the less positive biographical elements of some of these subjects. While the historical labels were kept in place, a darker-colored label was added that pulled on research done by scholars studying slavery in early America, as well as the archival work of Athens and others connected to the museum.