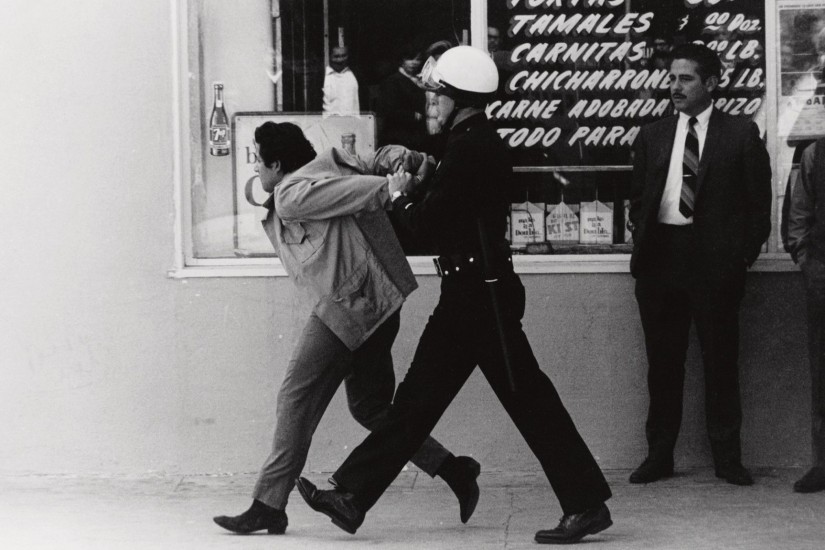 In the book’s introduction, writer and scholar Josh Kun notes that Rodriguez “shot whatever was in front of him, no matter where he was. He wanted the picture more than he wanted the perfect picture.”

Rodriguez snapped Marilyn Monroe and Lucille Ball at Hollywood events. He documented East L.A. streets and the farmworker movement. Plus, there were myriad cover shoots for glossies such as Tiger Beat and Rap Pages for whom he photographed 1970s heartthrob Shaun Cassidy and ’90s rap icon Ice Cube. (On one side of Rodriguez’s studio sits a painted backdrop from an early shoot with N.W.A signed by Dr. Dre and Eazy-E — a piece of hip-hop history.)

The images, however, all add up to one man’s singular view of Los Angeles — and its disparate, barely intersecting worlds.

Of his work, he says humbly, “You do the best you can.”

Working on the book — and a related gallery exhibit opening at the Lodge in East Hollywood on May 26 — has been a trip down memory lane.

Judging by the walls of his studio, it all did. Wedged between images of his own work are snapshots in which Rodriguez appears in the frame, hanging out with Cary Grant or standing proudly next to Cesar Chavez, hands full of camera gear.

“Double Vision” begins to pull together the story of Rodriguez’s varied career.

The book has more than 200 images. The photographer tells us, in his own words, the stories behind seven of them: