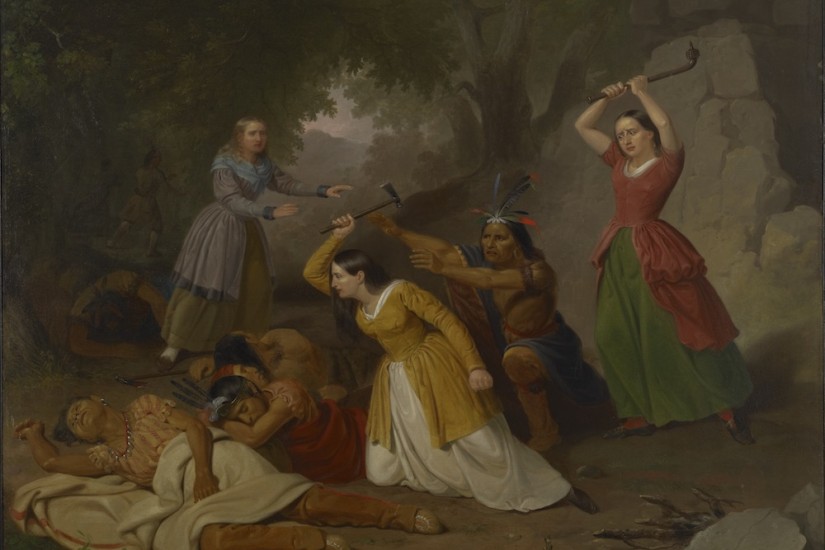 Born in 1657, Hannah Emerson Duston lived in Haverhill, Massachusetts, at a time when disputes among English colonists, the French in Canada, and various Native American nations resulted in a series of wars in the region. King Philip’s War (1675-1676), for example, decimated southern New England Indian nations, which lost between 60 and 80 percent of their population as well as their political independence. Many were sold into slavery. By the late 1680s and the start of King William’s War, fragments of those southern tribes had joined the Abenaki and other northern New England Indian nations allied with the French to fight the continuing expansion of the English colonists to the north and west. Native men conducted raids on frontier English settlements, burning property, killing or injuring some colonists, and taking others captive, either to ransom them back to their families, or to adopt them as replacements for their own lost family members.

Such was the context in which one group, most of whom were likely Abenaki, attacked the town of Haverhill on March 15, 1697—and encountered 40-year-old Hannah Duston at home with her neighbor Mary Neff. The Indians captured the women, along with some of their neighbors, and started on foot toward Canada. Duston had given birth about a week before. The captors are said to have killed her child early in the journey.

The group traveled for about two weeks, and then left Duston and Neff with a Native American family—two men, three women, and seven children—and another English captive, a boy who had been abducted a year and a half earlier from Worcester, Massachusetts. 14-year-old Samuel Leonardson may have been adopted by the family; he certainly had their trust. At Duston’s request, he asked one of the men the proper way to kill someone with a tomahawk, and was promptly shown how.

One night when the Indian family was sleeping, Duston, Neff, and Leonardson—who were not guarded or locked up—armed themselves with tomahawks and killed and scalped 10 of the Indians, including six children. They wounded an older woman, who escaped. A small boy managed to run away. Duston and her fellow captives then left in a canoe, taking themselves and the scalps down the Merrimack River to Massachusetts, where they presented them to the General Assembly of Massachusetts and received a reward of 50 pounds.