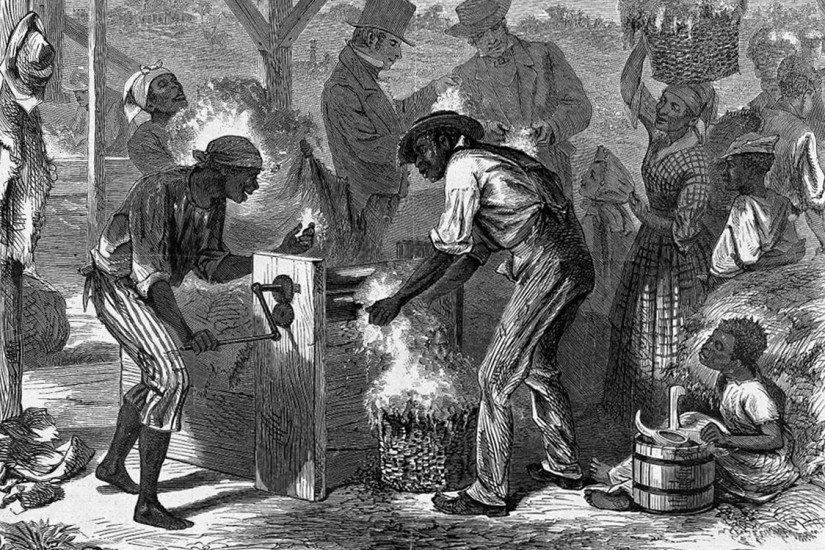 "The First Cotton Gin". Illustration accompanies an article describing a model of gin that preceded the one invented by Eli Whitney. Dec. 18, 1869.
Harper's Weekly/slaveryimages.org
…

In a few sentences, Du Bois scuttles the orthodox separation of slavery and capitalism. He names his history of American slavery “The Black Worker”—a subject, at once, of capital and of white supremacy. This, Robinson writes, was “the beginning of the transformation of the historiography of American Civilization—the naming of things.”

Rather than following Adam Smith or Karl Marx, each of whom viewed slavery as a residual form in the world of emergent capitalism, Du Bois treats the plantations of Mississippi, the counting houses of Manhattan, and the mills of Manchester as differentiated but concomitant components of a single system. Many scholars have expressed a fear that terming both what happened in Mississippi and what happened in Manchester “capitalism” will make it impossible to see the trees for the forest—“obscuring,” in the words of James Oakes, “fundamental differences between economies based on enslaved [and] free labor.” But there is no obvious reason that should be the case. Arguing that the history of (racial) capitalism began with the slave trade rather than the factory system does not necessarily pose any greater threat to historical and analytical precision than arguing that both Harriet Tubman and John C. Calhoun were human beings.

Indeed, Du Bois draws attention to the very differences that Oakes worries will be elided. He simply sees the production of these differences as an aspect of the history he is trying to understand, rather than as an inevitable answer to which any historical account must aspire. The history of white working-class struggle, for example, cannot be understood separate from the privileges of whiteness, to which the white working classes of Britain and the United States laid claim in their demands for equal political rights. And it was the ever-expanding frontier of imperialism and racial capitalism that pacified the white working class with the threat of replacement and promise of a share of the spoils. The history of racial capitalism, it must be emphasized, is a history of wages as well as whips, of factories as well as plantations, of whiteness as well as blackness, of “freedom” as well as slavery.