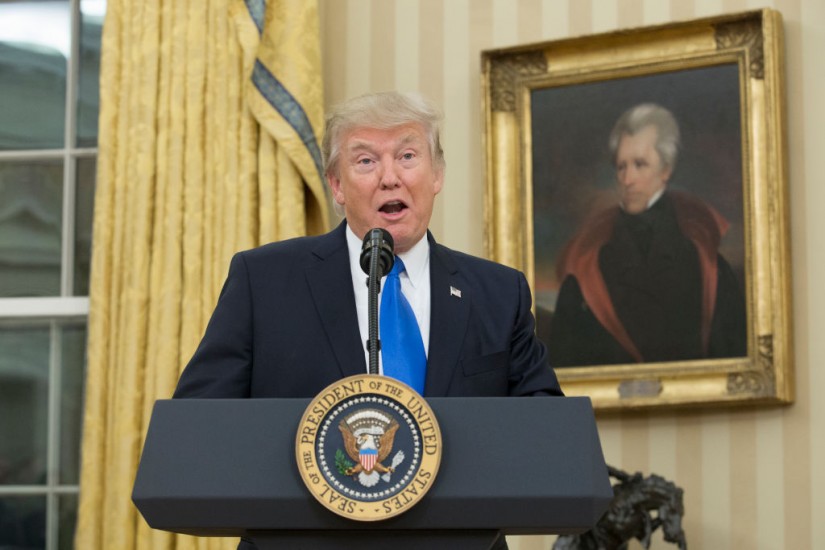 Trump with a portrait of Jackson
Michael Reynolds-Pool/Getty Images

On Wednesday, President Trump paid a visit to Andrew Jackson’s grave in Nashville, Tennessee, to lay a wreath and pay his respects. Trump isn’t the first president to visit Jackson’s Hermitage estate: He joins Theodore Roosevelt, Franklin Roosevelt, Lyndon Johnson, and Ronald Reagan on the list of chief executives who made the trek to the Hermitage. But Trump’s visit—coming as it does to the spiritual home of a president whose racial ideology formed the backbone of his populism—arrives with a certain resonance.

Trump, who hung a portrait of Jackson in the Oval Office, sees himself in the seventh president of the United States. A populist crusader against entrenched elites; a democratizer who will bring government back to the people. “The forgotten men and women of our country will be forgotten no longer,” said Trump in his inaugural address, in language that his chief strategist, Stephen Bannon, praised as “very Jacksonian.” This is the most familiar vision of Jackson, heavily indebted to the mythmaking of the Democratic Party, which claims him as its founder next to Thomas Jefferson. In this popular narrative of the party, Jefferson embodied equality, autonomy, and economic opportunity, whereas Jackson stood for democracy and its expansion. Under his presidency, the United States renounced its property requirements for voting, opening the franchise to all white men. Defenders of Jackson acknowledge his racial exclusivity but see it as separate from a broader embrace of the principle of democratic participation.

That’s one view of Jackson. There is another. That perspective sees Jackson in a different tradition. Not of democracy, but of white supremacy. This Jackson was a planter who built his wealth and influence with the stolen labor of more than 200 enslaved Africans. He forced Native Americans off their land in a campaign of removal that claimed thousands of lives in service of white expansion and white hegemony.