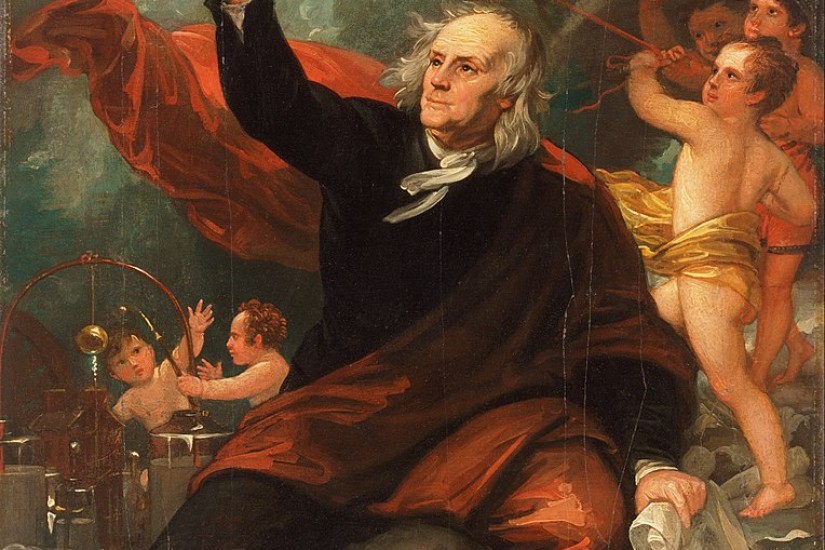 In 1748, a year after retiring early from a successful printing career, Benjamin Franklin was immersed in a newfangled craze just reaching America: electrical experiments. The thunderstorm in which he would fly his legendary kite was four years away; like other 1740s electricians, as they were then called, Franklin first toyed with static electrical charge generated by rubbing a glass tube vigorously with cloth. In a 1749 report to his fellow scientific amateur Peter Collinson, after attempting to explain why large amounts of such charge could accumulate on layers of metal interspersed with glass (in what is now called a capacitor), Franklin offered detailed instructions for an experiment contrived by his friend Ebenezer Kinnersley. Using hidden gilding as circuitry, Franklin wrote, a framed print of King George II (“God preserve him”) could be transformed into an electrified “magical picture” with a removable crown. The picture was constructed so that a spectator asked to take hold of the frame with one hand and remove the crown with the other would “receive a terrible blow, and fail in the attempt.” Meanwhile, the showman holding the top edge of the picture “feels nothing of the shock, and may touch the face of the picture without danger, which he pretends is a test of his loyalty.”1

Mysterious electrical forces were widely and excitedly discussed at the time. (“The fine ladies forget their cards and scandal,” a British observer reported, “to talk of the effects of electricity.”2) Franklin and Kinnersley brought attention to their new observations by connecting these forces with loyalty to the king, a connection whose appeal arose from the moral urgency of such loyalty in the colonies. Although George II had virtually no direct involvement in colonial politics, his authority was continually reaffirmed through ritual declarations of loyalty. Colonists expressed their love and deference for the king in public celebrations, proclamations, and official petitions to the government. This allegiance, historian Richard L. Bushman argues, was contractual, offered in exchange for the king’s protection of their lives and liberties. A popular party leader of Boston, Elisha Cooke, wrote that the “King’s prerogative, when rightly used, is for the good and benefit of the people, and the Liberties and Properties of the People are for the support of the Crown.”3 In this view of monarchy, king and subjects were joined in a circuit rather like the one underlying the magical picture.