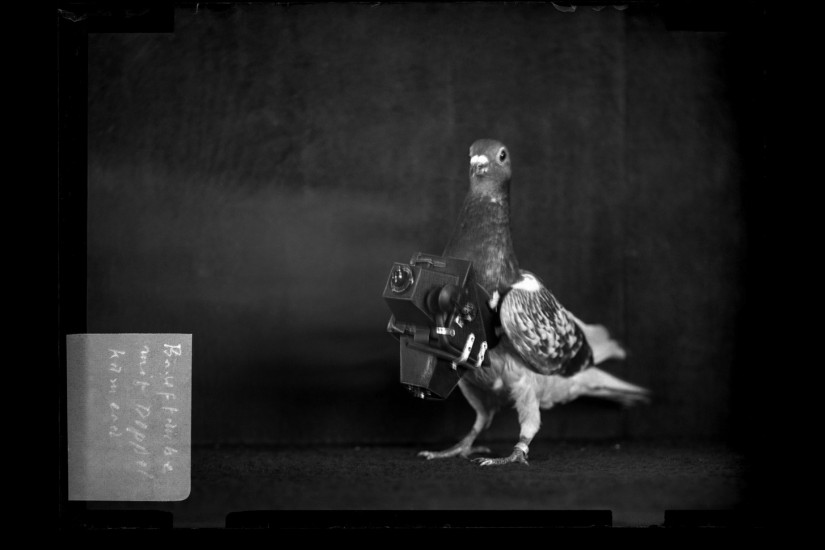 "The Pigeon Photographer," a recent book from Rorhof features images of the photographs pigeons took while in flight.
Rorhof/Stadtarchiv Kronberg

In 1907, just a few years after the Wright brothers lifted off in Kitty Hawk, and while human flight was still being measured in metres and minutes, Dr. Julius Neubronner, a German apothecary, submitted a patent application for a new invention: the pigeon camera. The device was precisely what it sounds like—a small camera fitted with straps and equipped with a timer so that pigeons could carry it and take photos in flight. Neubronner first used the device on his own flock of homing pigeons, which he sometimes employed to deliver prescriptions. In the following years, he showed his camera at international expositions, where he also sold postcards taken by the birds. Additionally, he developed a portable, horse-drawn dovecote, with a darkroom attached to it, which could be moved into proximity of whatever object or area the photographer hoped to capture from on high. These inventions represented a breakthrough at the time, allowing for surveillance with speed and range that was previously impossible. (Whether the cameras would actually capture the desired object, however, depended on luck and the whims of the pigeons.) The technology would soon be adapted for use in wartime—the cameras served as very early precursors to drones—although by the time of the First World War, just a few years later, airplanes were allowing people to do things that only pigeons could have done before.

Neubronner developed the pigeon camera for practical purposes. At first, he was simply hoping to track the flights of the birds in his flock. But his invention also represented a more sublime achievement. The images his pigeons captured, featured in “The Pigeon Photographer,” a recent book from Rorhof, are among the very early photos taken of Earth from above (the earliest were captured from balloons and kites) and are distinct for having the GoPro-like quality of channelling animal movement. That perspective that is so commonplace to us now, in which the rooftops stretch out before us as though they were made of a child’s blocks, and people crawl along like ants, was a rare sight when Neubronner took his pigeon pictures.