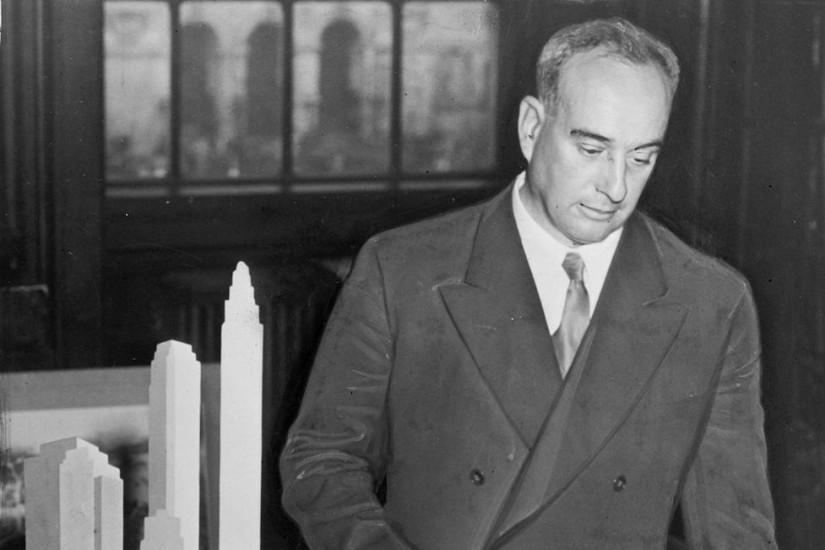 Robert Moses with a model of his proposed Battery Bridge.
C.M. Stieglitz/Library of Congress
…

To begin at the beginning: The United States has always been a corrupt society. Periodically, “good” citizens band together and elect to office political opportunists who are presented to the public as non-politicians. Briefly, things appear to be clean. But of course bribes are still given; taken. Nothing ever changes nor is there ever going to be any change until we summon up the courage to ask ourselves a simple if potentially dangerous question: is the man who gives a bribe as guilty as the man who takes a bribe?

For decades Vice President-designate Nelson Rockefeller has used his family’s money to buy and maintain the Republican party of the state of New York while his predecessor but one, Spiro Agnew, was busy taking money from various magnates who wanted favors done—men who differ from the Rockefellers only in degree. Yet the Agnews are thought to be deeply wicked (if found out) while no sign of Cain ever attaches itself to their corrupters. It is a curious double standard—rather like those laws that put the hooker in jail for selling her ass while letting the john go free with a wink. But then we are a godly people and, as Scripture hath it, it is better to give than to receive. Blessed then are the Kennedys and the Rockefellers who buy directly or indirectly the votes of the poor and the loyalty of their leaders in order that public office might be won, and personal vanity hugely served.

“The fact is New York politics were always dishonest—long before my time.” So testified Boss Tweed a hundred years ago. “There never was a time when you couldn’t buy the Board of Aldermen. A politician in coming forward takes things as they are. This population is too hopelessly split up into races and factions to govern it under universal suffrage, except by the bribery of patronage, or corruption.” This is elegantly put. As far as we know, Robert Moses did not take money for himself like Tweed or Agnew. He was more ambitious than that. Wanting power, Moses used the people’s money to buy, as it were, the Board of Aldermen over and over again for forty-four years during which time, if Mr. Caro is to be believed, he was, without peer, the fount of corruption in the state.