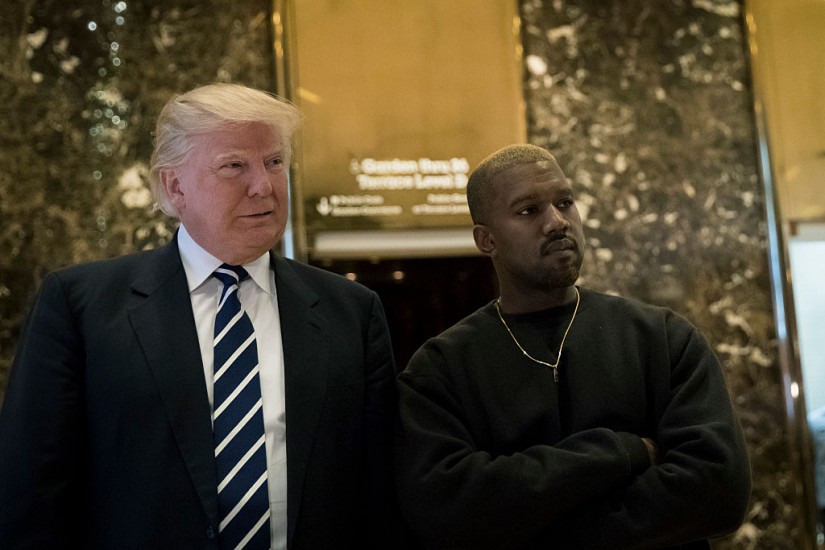 Then President-elect Donald Trump and Kanye West stand together in the lobby at Trump Tower, December 13, 2016 in New York City.
Drew Angerer/Getty Images

Since his campaign, Donald Trump has routinely claimed that he has a strong relationship with African Americans — despite all the evidence indicating he does not.

A lackluster showing among African Americans at the polls in 2016 and consistently low approval ratings haven’t diminished Trump’s confidence. Most recently, President Trump has seized on an endorsement from rapper and producer Kanye West to “prove” he was right all along. While speaking at the National Rifle Association’s annual convention last week, the president credited West with doubling his support among African Americans (citing a flawed Reuters poll of black men).

In heaping praise on the rapper, Trump became only the latest Republican president to attempt to use black celebrities to reach African American voters. Since at least the 1960s, Republicans have courted black entertainers, musicians and athletes as political surrogates to “speak” to and for black communities.

But rather than using celebrity to encourage genuine dialogues with black communities, all too often this approach has been a one-way street, focused purely on symbolism. Past presidents like Richard Nixon have used black celebrities as a shield against accusations of racism and racial indifference, while also using entertainers’ endorsements as evidence of widespread black support and an excuse to ignore African Americans’ most pressing criticisms and concerns.

Unsurprisingly, the political whims of “black celebrities” — absent substantive policy — has meant little to black voters. And for black celebrities from Wilt Chamberlain to Sammy Davis Jr. to Kanye West, the backlash has been fierce.

Nixon perfected the modern strategy of using black celebrities while playing down their substantive policy concerns. Republicans had deployed black athletes and entertainers as campaign surrogates for decades, but it wasn’t until the 1968 presidential contest that the tensions brewing around race, celebrity and the GOP exploded.

That was the year that baseball legend Jackie Robinson (who had aggressively campaigned for Nixon in 1960) quit the Republican Party. In nominating Nixon for president in 1968, Robinson argued, the GOP had sent an explicit message to African Americans telling “the black man to go to hell.” Robinson insisted that Nixon was a racist, whose coded demands for law and order and embrace of Southern segregationists would ultimately place African American lives in danger. Robinson’s anger accurately reflected the opinions of a majority of black voters in 1968, most of whom viewed Nixon in an unfavorable light.