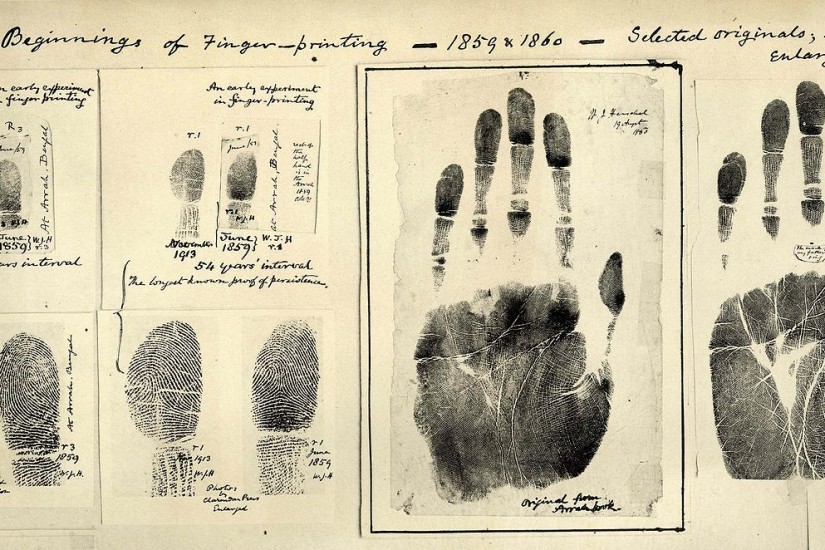 Thumb marks were used as personal seals to close business in Babylonia, and, in 1303, a Persian vizier recounted the use of fingerprints as signatures during the Qin and Han Dynasties, noting, “Experience has shown that no two individuals have fingers precisely alike.” The Chinese had realized that before anyone: a Qin dynasty document from the third-century B.C.E, titled “The Volume of Crime Scene Investigation—Burglary,” pointed up fingerprints as a means of evincing whodunnit.

In the mid-1800s, a British magistrate named William Herschel observed the Indian custom of inking hands or fingers alongside autographs or marks on contracts. Such agreements, he appreciated, were more often honored than disputed, and in the summer of 1858, Herschel started requiring prints on contracts with Bengali subjects. He credited their effect to superstition before seeing the truth: fingerprints actually did distinguish one person from the next.

Around the same time, a Scottish physician named Henry Faulds matched the greasy print from a drinking glass and the sooty print from a white wall to the criminals who had left them behind. Faulds wrote to Charles Darwin in 1880, asking the naturalist for help collecting “skin-furrows”—the ridges on fingertips reminded him of furrows in plowed fields. Faulds included cards and instructed Darwin to use printer’s ink, which could “easily be removed by benzine or turpentine” or by “burnt cork mixed with very little oil.” But Darwin was ill, and he punted the “curious” request to his cousin, the polymathic anthropologist Francis Galton, who had coined the phrase “nature versus nurture.” Galton took to the subject with gusto, piloting it toward science. (When Galton compared prints from “art-students” and “science-students” against “the worst idiots in the London district,” he found “no notable difference.”)

Mark Twain boosted the nascent forensic science into the realm of common knowledge with his novels Life on the Mississippi (1883) and Pudd’nhead Wilson (1894). The plots of both stories included murders solved with fingerprints (in the latter’s case, at a sensational trial). Galton had classified prints based on types of patterns, still known today as “Galton details,” but real-world fingerprinting for forensic application would struggle with a system to classify, index, and reference the marks for decades.