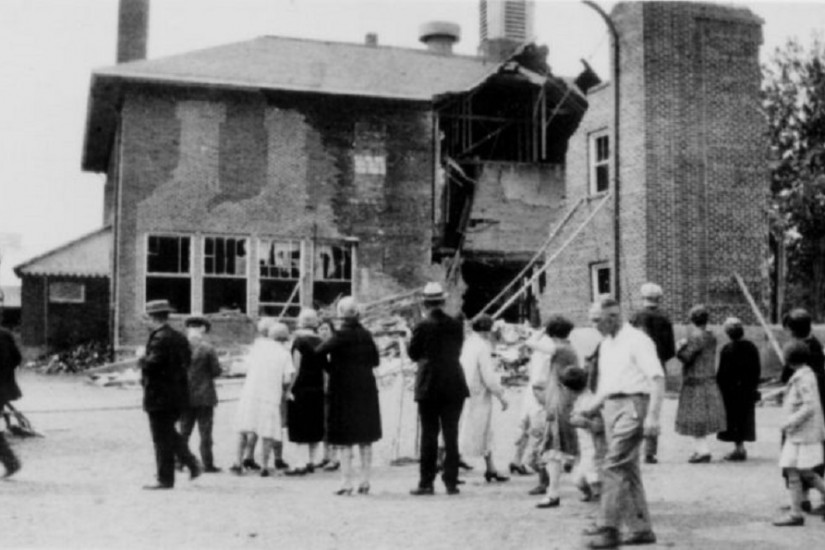 The aftermath of the Bath School bombing, May 18, 1927.
Wikimedia Commons
…

In 1923, like many contemporary rural communities, Bath voted to create a modern consolidated school district and to build a new school that would be funded by increased property taxes. Residents’ tax rates were nearly doubled under the plan, and a disgruntled Kehoe became politically active in response, embarking on a campaign to get the tax increase lowered, reversed, or nullified. In 1924, he was elected as a school board trustee, and even served as its treasurer.

Over the course of his three-year tenure on the school board, Kehoe carried out an obstructionist and single-minded anti-tax crusade. He was intractable and uncooperative, repeatedly clashing with his fellow board members. He refused to vote for any expenditure of any kind. He stubbornly made motions to adjourn meetings when other members disagreed with him, and he repeatedly charged the school superintendent, Emory E. Huyck, and others with financial mismanagement. In 1925, Kehoe was appointed to finish the term of the deceased township clerk, but was defeated when the position came up for election in 1926, probably due to public disapproval of his behavior on the school board.

In addition to being a school board member, Kehoe served as the de facto caretaker of the Bath Consolidated School, volunteering to perform free electrical, custodial, and repair work on the facility, specifically during school vacations. In 1926, he began legally accumulating both dynamite and the agricultural explosive pyrotol. Throughout the 1926-1927 school year, Kehoe methodically rigged the school with these explosives, wires, and timer devices as he performed maintenance work on the school’s boilers and generators. He also began systematically sabotaging his farm and property, girdling trees and cutting his grape vines.

May 18, 1927, was a bright sunny day and the last day of classes at the Bath Consolidated School. Kehoe began the day by murdering his wife and detonating explosives at his home, starting a fire that engulfed his farmstead buildings, where he had placed his wife’s body and bound his farm animals. When his neighbors responded and discovered unexploded dynamite on the property, Kehoe instructed them to move on so that they would not be injured. Shortly afterwards, at approximately 8:45AM, an explosion rocked the Bath school. Townspeople rushed to the scene, only to find the north wing of the school wholly collapsed. Kehoe drove to the school in his truck, which he had packed with explosives and metal debris. As Superintendent Huyck approached the truck hoping to receive rescue assistance, Kehoe detonated the explosives with a rifleshot, instantly killing Hucyk, a student, two adult bystanders, and himself. In total, thirty-eight school children (more than 12% of the school population), two teachers, three other adults, and both Kehoes died.