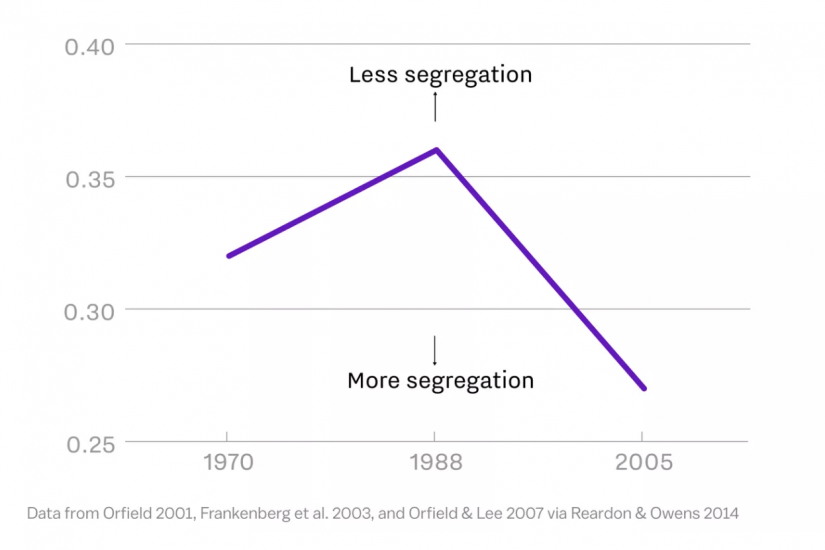 Indices of exposure show black-white segregation have actually gotten worse since the 1970s.
Data via Sean Reardon and Ann Owens/Vox

The predominant narrative among education activists is that school segregation has gotten worse in the past several decades. It’s an argument backed by data — one I’ve stressed in my own work. A few days ago, a New York Times op-ed also made this argument and cited that same data.

But National Review’s Robert VerBruggen has pushed back on this notion. In response to the Times piece, he wrote that changing demographics makes the data misleading — and that ultimately, “we’re not going in reverse” when it comes to segregation. Prominent journalists, like New York magazine’s Jonathan Chait and my colleague Matt Yglesias, shared VerBruggen’s post on Twitter.

The National Review piece isn’t coming out of the blue. The idea that changing demographics — the US becoming less white — makes it harder to integrate schools is something that has picked up steam in recent years. In Connecticut, Gov. Dannel Malloy has pushed for more leniency in standards set by a court-ordered desegregation case.

So how could two sides look at the data and come to two different conclusions about school segregation trends?

The core disagreement comes down to federal government data that was highlighted by the UCLA Civil Rights Project on the 60th anniversary of Brown v. Board of Education, the Supreme Court case that ruled segregated schools were unconstitutional.

The data shows that black students in the South are less likely to attend a school that is majority white than about 50 years ago:

National Review’s VerBruggen sees this chart and argues that a smaller portion of black students are attending majority-white schools because the US is just less white than it was 40 or 50 years ago:

Both arguments are the products of some messy data work.

On one hand, if we’re measuring segregation by how many children attend majority-white schools, then it’s worth acknowledging that white people are now a smaller percentage of the US population. This is something I’ve admittedly left out of my work when presenting this data.

On the other hand, VerBruggen uses this flaw to argue that school segregation actually isn’t getting worse — even though it’s virtually impossible to make this argument from this data alone.