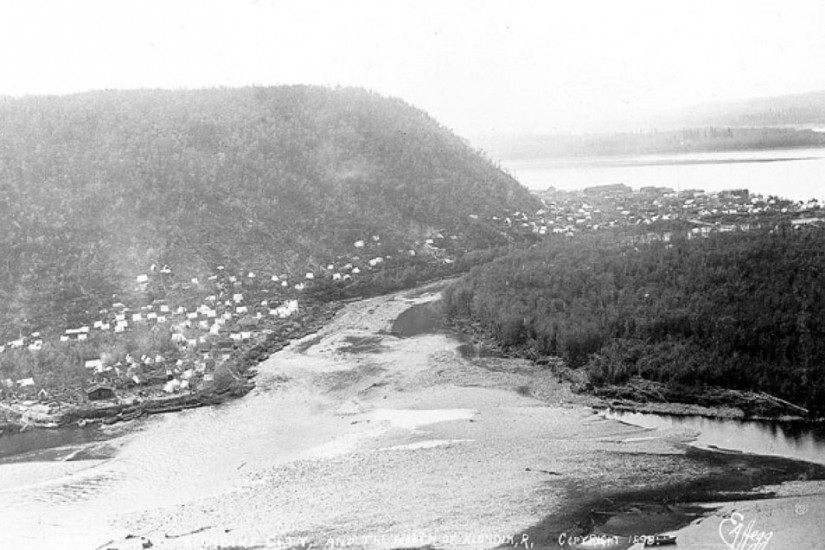 Hundreds of stampeders’ tents on the Tr’ochëk site and the west bank of the Klondike River (1898).
Vancouver Public Library
…

This story is not the only example of conflicting narratives pertaining to mining in the Yukon. Throughout my doctoral research it has become clear that the development of gold mining in the Yukon has been colonial in nature, brining miners and southern institutions into the Klondike with little benefit to the local Indigenous population who were most affected by the environmental change resulting from mining. Mining in the Klondike, as mining elsewhere around the world, was inextricably linked with colonial land use ideologies. The Klondike Gold Rush marked the beginning of major transition in the lives of the Tr’ondëk Hwëch’in. This long legacy of colonial resource extraction and relocation does not belong to the 19th and 20thCenturies; two recent conflicts centered around mining development and land use in the Klondike region serve as a reminder that historical mining activity and contemporary struggles converge in mined landscapes. Just as in the 20th century, the Tr’ondëk Hwëch’in and other Yukon First Nations challenged contemporary attempts to remove them from homeland and overlook their concerns in mining development and planning.

Land in the Klondike Valley was both homeland and resource. The Klondike falls within the traditional territory of the Tr’ondëk Hwëch’in First Nation who had lived, hunted, travelled, and gathered across this landscape for generations before, during, and after southerners came into the region. As miners came into the Klondike during the Gold Rush (1896-1900) they carried with them land use ideologies associated with colonialism – specifically the belief that nature was meant to be assessed, controlled, used, and valued in commercial terms.[1] Mining was inextricably linked to ideas of private property and ownership of land. These ideologies of land use were further complicated by the perception of the Yukon as a mining frontier. At the turn of the 20th century, nowhere was promoted as resource frontiers in the public imagination more so than the Klondike and Nome, Alaska. Identifying the Yukon as a frontier overlooks the long and established presence of multiple Indigenous groups who conceived of the Yukon as a homeland.

Though most outsiders coming to the Yukon at this time did not intend to settle, these ideologies had similar consequences of Indigenous dispossession and relocation to that which occurred in settlement colonies.