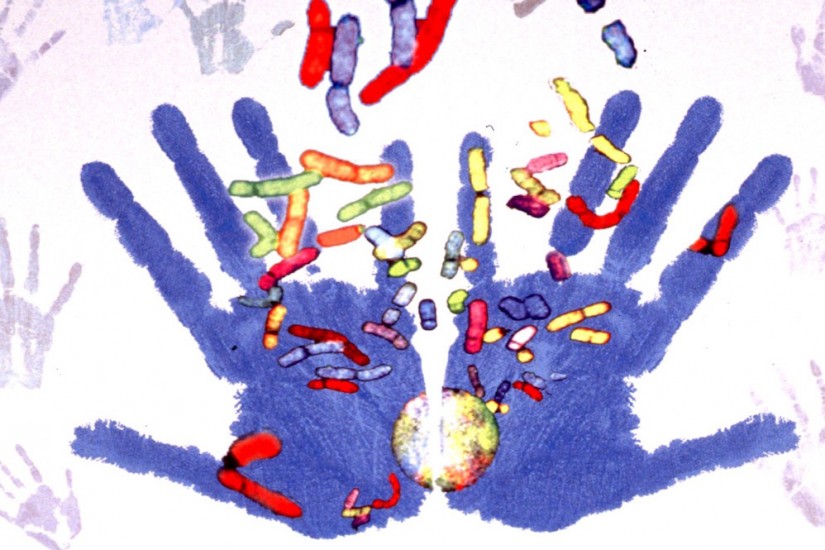 Detail from a poster for the National Institutes of Health's 2002 Human Genome Lecture Series.
U.S. National Library of Medicine

The direct-to-consumer genetic testing company 23andme has recently been described by journalist Erika Check Hayden as a “unicorn.” For Hayden, this Silicon Valley idiom describes the company’s one billion dollar valuation while also capturing the rare opportunity it affords to scientists: its two million customers make up the largest available pool of gene-linked health data. The home testing kit’s packaging does little to disrupt visual continuities with popular imaginings of unicorns: a matte, velvety white box has been striped along one edge with rainbow chromosomal pairs, their neat, parallel lines forming a multihued mane.

23andme’s use of saturated fields of color and streamlined, graphic shapes may seem part and parcel of 21st-century advertising and design trends favoring a minimalist aesthetic, sleek shapes, and bright pops of color. However, this visual style has long played a role in representations of genetic material in popular visual culture and scientific literature from the 1950s to today.

These images, particularly their use of simplified shapes and solid colors, help shape popular conceptions of ancestry, genetic disease, and hereditary traits as fixed and quantifiable, when in fact the expression of genetic traits remains mutable and dependent on myriad factors, such as individual bodily differences, environment, and immunity.

Images have played an essential role in learning about genetics since the 1950s. While nineteenth-century scientists such as Gregor Mendel and Charles Darwin pointed to the observable inheritance of physical traits in offspring, the mechanisms that facilitated heredity could only be identified through processes of visualization. Raymond Gosling’s Photograph 51, taken while he was working under chemist Rosalind Franklin in 1952, famously revealed these mechanisms by bringing the structure of DNA to light.

From Photograph 51, James Watson and Francis Crick used 3D modeling techniques — once again relying on visualization — to demonstrate DNA’s now well-known double-helix organization. The identification of this structure, particularly the double strands of paired bases, allowed scientists to understand how DNA stores genetic information, replicates itself and produces proteins used by the body.

From this knowledge, cultural ideas about DNA as getting at the truth of biology and bodies have proliferated in both science and popular culture. For example, Watson, who went on to head the Human Genome Project, famously declared that “our fate is in our genes.”4 Dorothy Nelkin and M. Susan Lindee describe this phenomenon as “genetic essentialism,” where DNA explains identity, what diseases we get, what we look like, and even how we participate in our familial and cultural networks.

Yet genetic expression is not this straightforward.