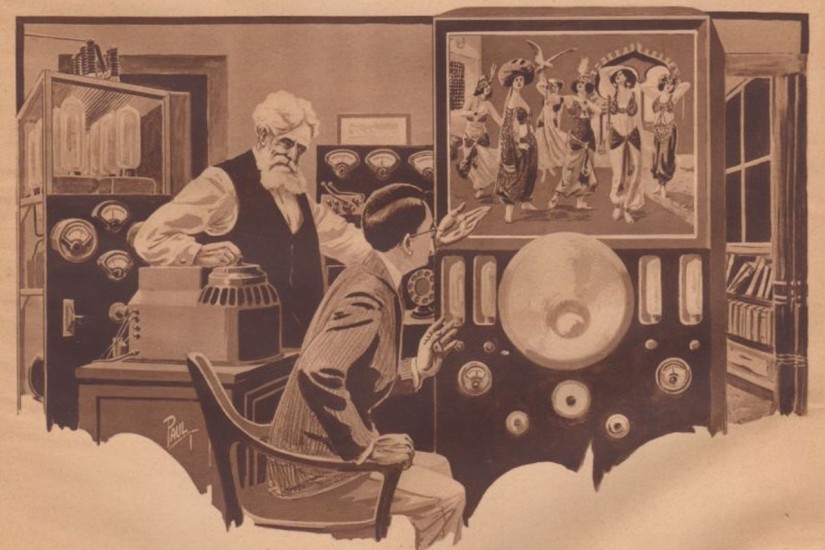 This TV set was the futuristic vision of illustrator Frank R. Paul in 1922. And I absolutely love it.

I’m pretty obsessed with the ideas that illustrators, writers, and technologists had for television in the 1920s. It was a decade when radio broadcasting went from niche to mainstream. So the ideas that people had for TV, before the first successful TV transmission was demonstrated in 1925, look like amazing contraptions that stretched the sci-fi imagination.

As I’ve written many times before, TV was often imagined as a two-way medium, allowing people to talk the way we do today via Skype or FaceTime. But sometimes “TV” was also shown as simply a one-way broadcast medium that could educate and enthrall viewers about things that were happening all around the globe, like we see in the illustration above from the October 1922 issue of Science and Invention magazine.

When this image was published in 1922, Americans were already very familiar with movies and their capacity to transport audiences through moving pictures. But TV was still a fantastical dream—an appliance that might allow for watching live broadcasting in the comfort of your own home, in vivid color no less.

The story that accompanied this illustration featured the fictional Doctor Hackensaw, a fabulous inventor who would bring the readers of Science and Invention his fantastic new contraptions each month.

“This is my television apparatus. It does for images what the telephone does for sounds—carries them hundreds of miles and even further if desired. By means of electrical waves the images of an object in Chicago, or even in San Francisco is brought to me here in my laboratory in New York. Nor is it a motionless photograph in black and white that I receive. The objection in motion, in its natural colors is thrown upon this screen here enlarged to any size I desire. I really have a moving picture in colors of whatever scene is thrown upon the receiver of the apparatus at the sending station.”

One of the most interesting things you’ll notice in this illustration is the large horn just below the screen. The modern loudspeaker wasn’t invented until the mid-1920s, so in this depiction from 1922, the TV has a horn like you might see on an old-fashioned Victrola.
…
View on Paleofuture
View Connections