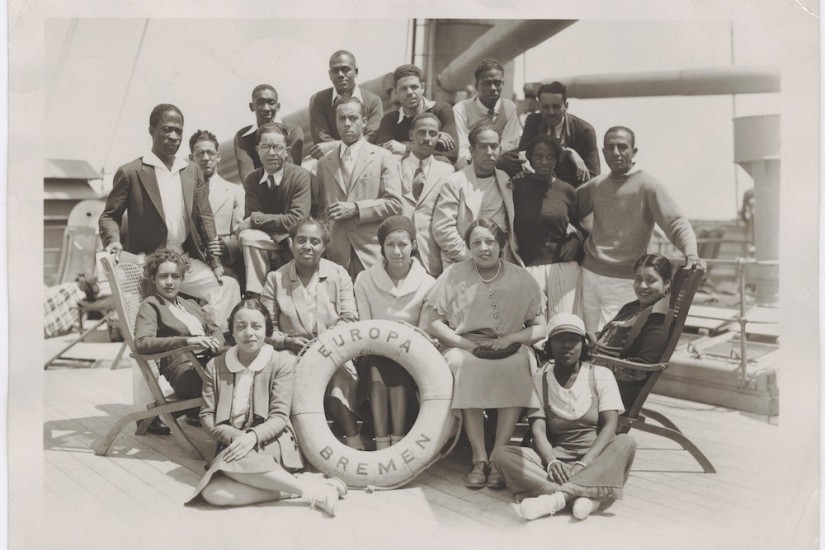 By 1932, Soviet artists were in the earliest stages of adjusting to what would become the official creative policy of the Party: socialist realism, the doctrine under which experimental art was deemed bourgeois, confusing, and treasonous. Conversely, the Soviets saw black writers as inherently “social,” too oppressed to busy themselves with apolitical questions of style, form, and artistry, a narrowing that resonates with contemporary frustrations over what Vinson Cunningham describes as “broader culture’s hunger for ‘identity writers’ instead of whole humans.”

The Soviet anthology, as reported by the Associated Negro Press, was to include poems by Langston Hughes, Countee Cullen, Claude McKay (who had spent time in Moscow in 1922 as a delegate of the Communist International) and others. The anthology was eventually published in 1933 under the title “Africa in America.” In a copy held by the New York Public Library, the inside jacket reveals a bright yellow background and in the corner, a shackled black hand reaching upwards, perhaps towards communism. The poems were translated by the Russian writer Julian Anisimov whose own poem, “Kinship,” was translated by Hughes into English that same year. “Kinship” argued that the Russian and “the Negro” shared an innate, even biological solidarity, a belief crystallized for Anisimov in fact that Russia’s most celebrated poet, Alexander Pushkin (1799-1837), was of African descent. “The blood of Pushkin,” it read, “Unites/The Russian and the Negro In art./Tomorrow/We will be united anew/In the Internationale.”

Appearing in the early 1930s, “Africa in America” arrived somewhat late to what scholar Brent Hayes Edwards describes as early twentieth-century Europe’s “obsession with anthologizing the Negro.” In his book, The Practices of Diaspora, Edwards writes: “in a rush that with hindsight is astonishing... there was great interest in researching, notating, transcribing, assembling, and packing almost anything having to do with populations of African descent.” Edwards notes that anthologies often served to either frame black people as backwards and inferior or conversely as modern, cultured, equal to whites. Anthologies were never merely archival, he insists, but meant to demonstrate something essential about blackness. For the Soviets, the anthology was part and parcel of their plan to situate “the Negro” (particularly the American Negro) as a natural political ally during the Cold War. But that framing required, as framing tends to do, a certain degree of distortion, one aided in this case by the process of translation.