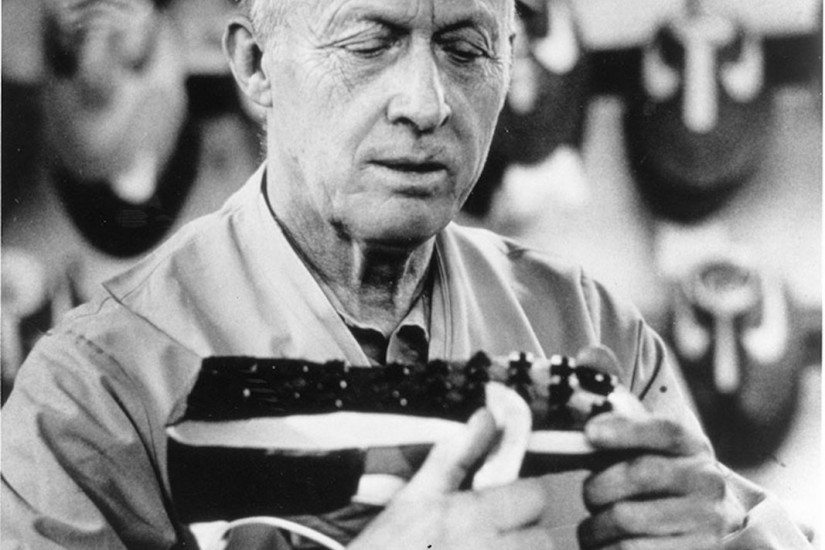 Bill Bowerman, co-founder of Nike, tinkers with the outsole of one of his early shoe models.
Nike/Wikimedia

The way Bill Bowerman told the story, one of Nike’s greatest innovations came to him at breakfast. The University of Oregon track coach, who meticulously crafted custom shoes for each of his athletes, had been struggling to develop a shoe that the team could wear to train on surfaces other than the track. His “eureka” moment came while eating waffles with his wife on a summer Sunday in 1971, when it occurred to him that the grooves of the waffle iron were a perfect mold for the multi-terrain soles he envisioned. He poured molten rubber into iron after iron until he perfected the waffle sole pattern that Nike, which he cofounded in 1964, continues to use on some running and training shoes today.

According to Nicholas Smith, author of the new book Kicks: The Great American Story of Sneakers, the whimsy of the waffle-iron shoes became the “big Nike legend.” One of Bowerman’s original waffle irons can even be found at Nike headquarters in Beaverton, Oregon today. But to Smith, the waffle iron experiment may say even more about Bowerman himself than his brand.

“[Bowerman had] this kind of obsessiveness about what to many people probably is sort of an insignificant object,” says Smith. “He would meticulously test on his athletes what was working in his shoe, and what wasn’t working…. When he saw that waffle pattern, that shape, he said, ‘Aha, these little square cube things that go on the shoe will provide the most grip.’”

But it’s this kind of dedicated tinkering and entrepreneurship that pervades the history of sneakers altogether. According to Smith’s research, sneakers as we know them may never have existed without Charles Goodyear’s serendipitous invention of vulcanized rubber in 1839. Despite his poor business sense that landed him repeatedly in debtor’s prison, the inventor saw an opportunity for technological advancement when he purchased hundreds of rubber life preservers in 1834 that had melted in the New York City summer heat. After years of fruitless experimentation, Goodyear finally happened upon the combination of lead, sulfur and heat that would allow the rubber to keep its shape.