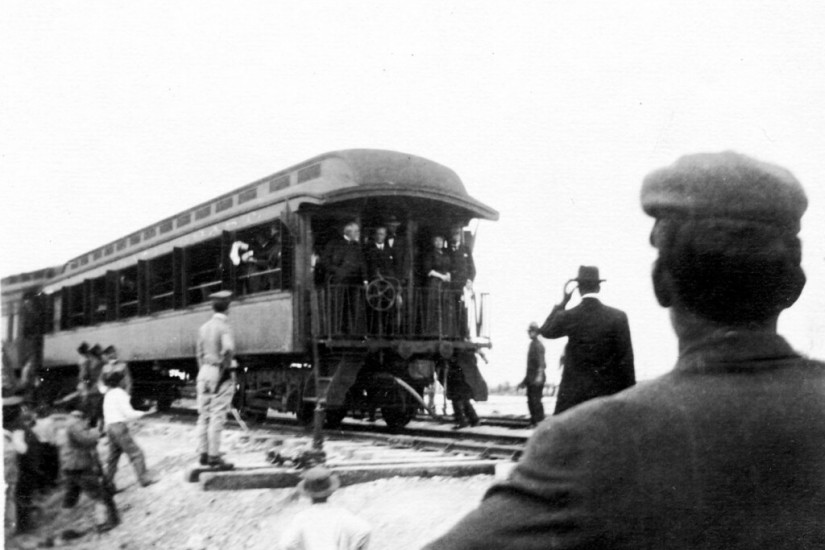 Mr. and Mrs. Henry Flagler (right) and George W. Allen on the back of Flagler's private car on first train to Key West on January 22, 1912.
flickr.com/keyslibraries
…

From 1885 to 1913, Standard Oil founder Henry Flagler built an empire in Florida of railroads, hotels, steamship lines, resorts, even cities, from Jacksonville to Key West. He raised Palm Beach and Miami from the sand. And like another real estate tycoon, his name is blazoned across the state’s landscape: Flagler College, Flagler County, Flagler Memorial Bridge, Flagler Beach.

Few know, however, that Flagler built his tourist empire — and modern Florida — by exploiting two brutal labor systems that blanketed the South for 50 years after the Civil War: convict leasing and debt peonage. Created to preserve the white supremacist racial order and to address the South’s labor shortages, these systems targeted African Americans, stealing their labor and entrapping them in state-sanctioned forms of involuntary servitude.

Why do so few know this chapter of our history?

Committed to preserving his and the state’s reputation, Flagler co-opted powerful news outlets to spread distorted versions of events. When the U.S. Justice Department, African American leaders and northern muckraking journalists exposed Flagler’s labor practices, he colluded with powerful government, newspaper and business interests in Florida to whitewash public knowledge and, by extension, the historical record itself.

Throughout the 1880s and 1890s, Flagler, like many white industrialists across the South, leased African American convict labor from the state. Convicts extended his Florida East Coast Railway (FECR) from West Palm Beach to Miami, cleared the land for his Royal Palm Hotel in Miami and graded the rail lines running from the mainland to his FECR extension across the Keys.

Flagler and Florida were not aberrations. Convict lease laws in almost every Southern state essentially criminalized blackness, providing a means for authorities to arrest freed people for pseudo-crimes like vagrancy, lease them to private companies and force their labor.

For the state, convict leasing generated revenue and provided a tool to intimidate and control black citizens. For private businesses, the state offered vulnerable laborers who could be worked beyond human endurance and brutalized at whim.

The convict lease system in Florida was especially violent. Chains, hounds, whips, sweat boxes, stringing up by the thumbs — these were part of everyday existence in convict camps. Sanitary conditions were widely deplorable and medical attention scant. Prisoners with gruesome injuries and diseases were forced to work despite their conditions. Sexual assault was a constant threat for women caught in the system. Not even children were spared.