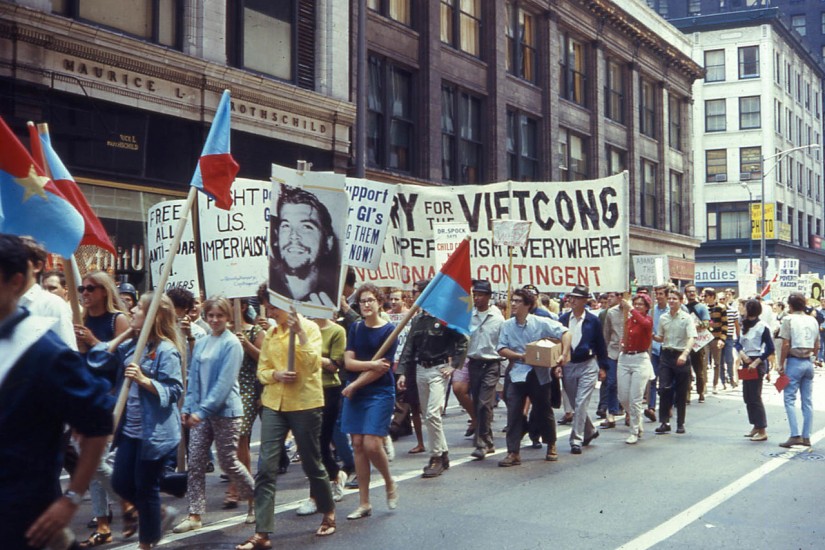 A Vietnam War protest demonstration that took place in Chicago as it was preparing to host the Democratic National Convention on August 10, 1968.
flickr.com/davidwilson1949
…

The spirit of 1968 was not merely political. Simultaneously individualist and collectivist, as well as both sober and psychedelic, it was cultural, economic, sexual, hedonistic, spiritual, and transcendental. In a few of its more crucial aspects, it was a wild success. Two 68ers—Jack Straw in Britain and Joschka Fischer in Germany—became foreign secretaries of their countries. The women’s movement, galvanized in large part by the unrelenting male chauvinism of 1968’s leaders, intervened in history, as did movements for racial and ethnic equality. Protests against the war in Vietnam played a role, however indirectly, in ending it. Soviet-style communism did, eventually, topple. Universities were transformed, as was, for a brief moment in time, the Catholic Church. Conscription ended. Janis Joplin and Jimi Hendrix changed music.

But a powerful reaction began as early as the first protests in Paris. After fleeing to a military base, Charles de Gaulle announced new elections, and when they took place on June 23, 1968, his party gained even more seats. Not only did May 1968 fail to survive the summer of its birth, but France is now led by a man born nine years after the shock and awe of 1968 came to an end. If you utter “insurrection” in Paris today, you will likely conjure up images of the right-wing nationalist Marine Le Pen.

In the 50 years since 1968, many prominent radical figures of the time have turned to the right. David Horowitz, the Trump-supporting right-wing propagandist, had been the American New Left’s major theorist in the 1960s. His conversion pales in comparison to that of Benny Lévy, Jean-Paul Sartre’s last personal secretary and a self-professed Maoist, who became a passionate Zionist and died an Orthodox Jew in Jerusalem. Others did not turn right wing per se but did become supporters of a more militaristic turn in foreign policy in the name of humanitarian interventionism, none better known than Bernard Kouchner, the co-founder of Doctors Without Borders.

1968 may have ushered in a new world, but it is a far cry from the one the activists of those years imagined then. Donald Trump is the American president, neo-Nazis are gaining in Germany, Britain is turning its back on Europe, and recently liberated Communist countries compete over how far to the right they can turn.