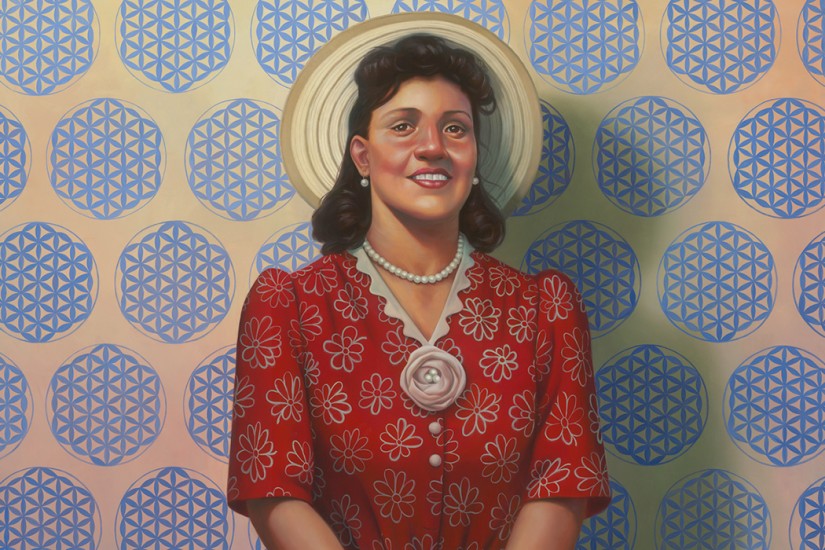 Kadir Nelson’s 2017 portrait of Henrietta Lacks has been jointly acquired by the Smithsonian’s National Portrait Gallery and National Museum of African American History and Culture, and debuted on May 15th, 2018, at the National Portrait Gallery. It will be on view there through November 4th. Lacks’s name is somewhat well-known today, thanks to Rebecca Skloot’s 2010 book The Immortal Life of Henrietta Lacks, which was made into a 2017 HBO film. But Lacks herself, a black woman who died in 1951 at the age of thirty-one from cervical cancer, was obscure for decades. The painting reinforces her presence in this complicated case of medical ethics.

In Nelson’s painting, Henrietta Lacks is radiant in a red floral dress, which is missing two buttons. Their absence recalls how cells from her cervical tumor were taken without consent, and developed into an “immortal” cell line called “HeLa” used in everything from cancer treatments to vaccines. Nelson’s painting, titled Henrietta Lacks (HeLa): The Mother of Modern Medicine, is based on a 1940s photograph of Lacks, and is embedded with symbolism of her posthumous impact. The blue wallpaper behind her involves the “Flower of Life” geometric figure, a symbol of the eternity of space and time.

Historian of medicine Jacqueline H. Wolf writes in the Journal of the History of Medicine and Allied Sciences that one of the initial uses for HeLa was in developing the polio vaccine, and the cells have since “been used to develop cloning, gene mapping, and in vitro fertilization techniques and to study the effects of an endless array of toxins, drugs, and pathogens on human cells.” Lacks’s long-lived cells can be reproduced indefinitely, making them popular in labs from the 1950s to the present. (A search on JSTOR pulls up hundreds of scientific articles on HeLA research.) A 1976 issue of Science declared HeLA the “first established human cell line.”

As invaluable as HeLa is to biomedical progress, Lacks’s story also raises questions about privacy, consent, and inequality in medicine. As Skloot explored in her book, Lacks’s family was unable to afford many of the medical advances supported by research on her cells.