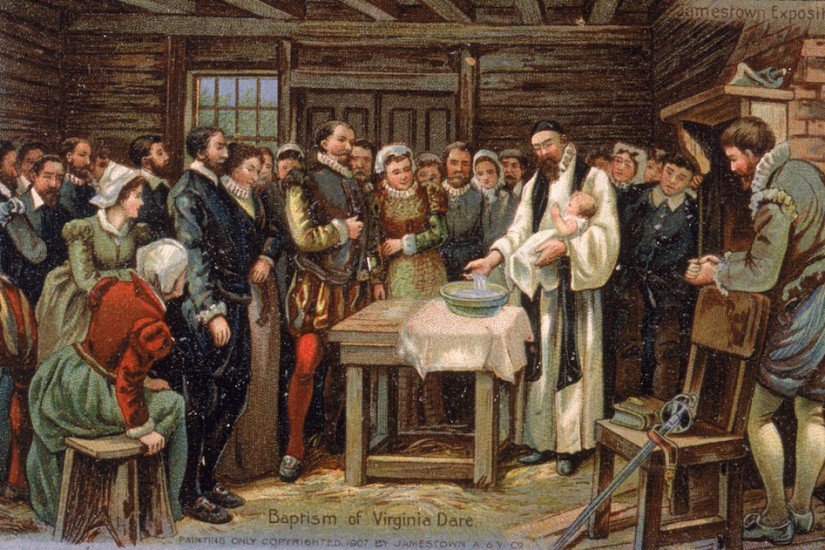 With Confederate statues toppling while President Trump taunts Sen. Elizabeth Warren as “Pocahontas,” it’s clear that our nation’s current divisions reach deep into our shared past. But one of the strangest of those battles is over a baby born on a remote North Carolina island more than four centuries ago.

Like Robert E. Lee or Pocahontas, Virginia Dare is as much mythical as she is historical. The first English child born in the New World, she is famous for vanishing along with the other 115 colonists at Roanoke Island who made up England’s first attempt at settling the New World. Less well known than her disappearance, though, is her persistence as a potent symbol of white supremacy. Unlikely as it may seem, the story of this innocent child, about whom we know little more than a name and date of birth, provides a surprising window into the origin of our current national anxieties about race, gender and immigration.

For two-and-a-half centuries after the colonists vanished, the failed Roanoke venture was largely forgotten. Then, in 1834, Harvard historian George Bancroft wrote a best-selling work that cast the botched effort as a romantic mystery. He also resurrected “the first offspring of English parents on the soil of the United States.” Female writers, eager for inspiring women and girls from the country’s past, seized on this brief mention. In an 1837 magazine story recently unearthed by English professor Thomas Shields, Eliza Lanesford Cushing coined the term “Lost Colony” and created the legend of the fair-skinned Virginia dazzling the swarthy Indians with her beauty and skill. But Virginia remained chaste, keeping their “uncontrolled passions” at bay.

The story spawned a genre, one perfectly suited for an era in which white Americans felt under threat from outside forces. In the 1830s, an influx of non-British immigrants alarmed white Americans and a mercurial president, whose promise to clean up Washington split the country in two with his radical policies. Race relations were volatile and violent; tens of thousands of Native Americans were forced west while Nat Turner led a slave rebellion that was brutally suppressed. The plight of an innocent white girl wandering the dark forest among lusty savages spoke to Americans who worried that people of British heritage were losing their grip on the young republic. Soon, newspapers were referring to “the first Anglo-American, Miss Virginia Dare,” and legends proliferated of her forest life as a kind of American Artemis.