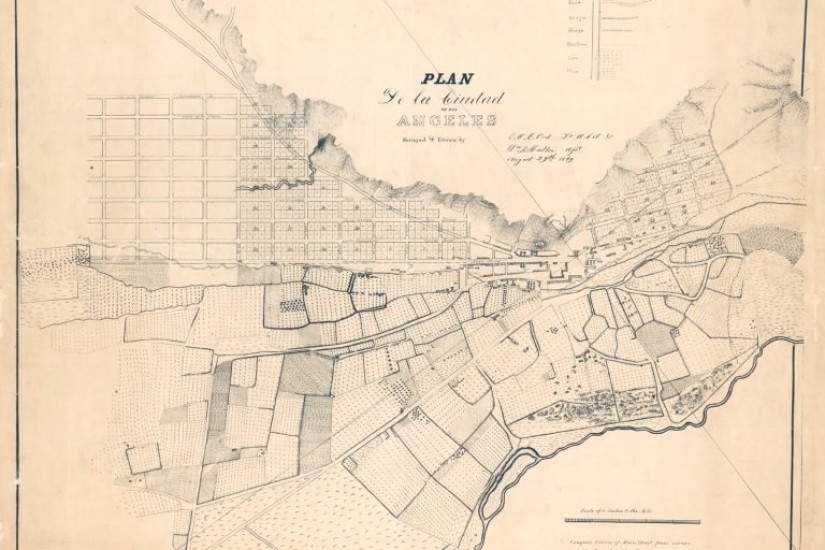 This was an era when both city and the nation were susceptible to heroic conceptions of technology. 22 Already drunk with the development-stimulating waters of its newly piped “river,” Los Angeles sought to take the offensive. “Land here is so valuable it is advisable to keep the right of way as narrow as possible,” wrote the engineer Charles T. Leeds in 1915. 23Empowered by a countywide mandate, engineers immediately formulated plans to “train” the river: a 1916 drawing depicts it as little more than a line drawn by engineers seeking the most civil path for what they called an “unruly dog.” 24

It took the catastrophic flood of New Year’s Eve 1934 — which killed over 100 people, destroyed 198 homes, and caused millions of dollars in damage — for flood control to pass from local to federal control. In 1936 the U.S. Army Corps of Engineers was charged with overseeing flood mitigation projects across the nation, including in Los Angeles. And just two years later, the situation reached another critical point; the flood of March 1938 — the most damaging in the river’s history — led unexpectedly to the discovery of a technical solution. Before the waters receded, the Army Corps had begun to assess the performance of the county’s interventions and found the answer to the problem of the Los Angeles River in the Arroyo Seco. 26 While constructing the first reinforced concrete freeway in the nation, the county had begun using the same material to channelize the adjacent Arroyo Seco creek. Where other control measures — like spray-on concrete, channel-training brush piles, boulders, and even car “fences” — had all failed, the freeway-like concrete walls survived the violent flows, becoming the perfect prototype for the larger river. This nearly full-scale “model,” together with new observations and measurements, enabled the Army Corps finally to control the flooding of the willful urban river.

In the next two decades, the Army Corps systematically transformed the Los Angeles River from an intermittent, meandering stream bordered by willows and cottonwoods into the concrete storm drain we see today. Trees were removed from banks, the river’s sandy bed was excavated and lined with concrete, and its course was straightened.