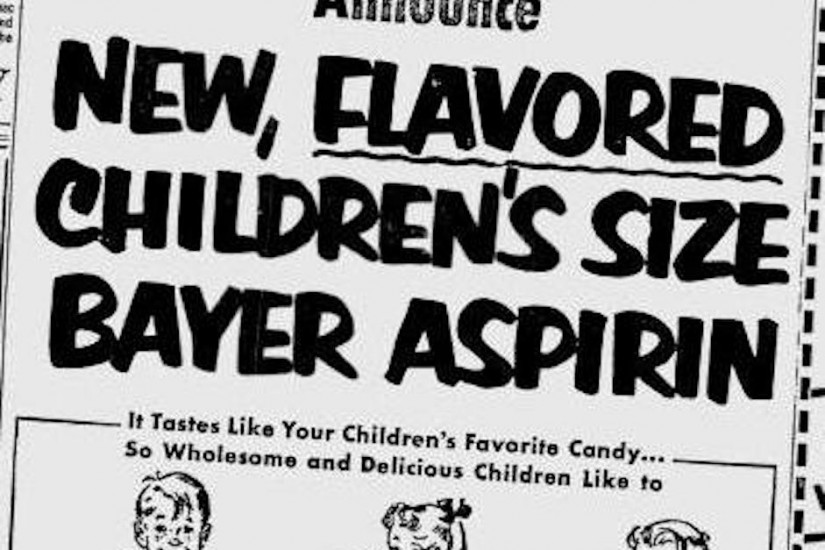 An advertisement for children's aspirin in the 'Reading Eagle' newspaper on June 15, 1952.
Bayer/Reading Eagle
…

By the 1950s, low-dose, flavored aspirin was the number-one drug ingested by children, far outstripping its chief competitor, penicillin. Plough’s profits increased by double digits, in some years by as much as 50 percent.

If the narrative had ended here, the candy aspirin story would be a reification of American capitalism’s dynamism and societal benefits. But an unintended consequence soon appeared. Within a few years the American Academy of Pediatrics (AAP) documented a dramatic increase in aspirin poisoning in young children. The statistics seemed irrefutable: By 1951, three years after St. Joseph Aspirin for Children became available, preschool-age children represented 80 percent of aspirin deaths.

But nothing in Plough’s advertisements mentioned the importance of keeping it away from toddlers and preschoolers, and many parents may not have realized the threat from an overdose. They were undoubtedly horrified to learn that a toxic dose of aspirin could cause ringing in the ears, sleepiness, rapid and deep breathing, vomiting, and vision problems. An especially high dose could result in seizures, coma, even death.

Parents even sometimes inadvertently overdosed children. There was no mandate for a standardized children’s aspirin preparation. Each company decided how much acetylsalicylic acid to put in a tablet. St. Joseph, for example, sold a 1.25-grain tablet (80 mg), whereas Bayer’s was 2.5 grains (160 mg). Parents needed to read each label carefully. This confusion worried the AAP, which publicized the problem. As soon as the organization reported that 50 percent of accidents in children were poison-related, pediatricians, nurses, and public-health officials began tracking all accidental ingestions in children. In most instances, aspirin topped the list.

Despite evidence mounting in the news media and professional literature, as well as from FDA field agents, the aspirin industry, with Plough in the lead, denied any safety problem with children’s aspirin. If any action was needed at all, Plough executives argued, it was simply parental education.

Other companies in that market agreed. Just as the tobacco industry had begun doing with regard to health risks from cigarettes, aspirin manufacturers shaped the debates concerning aspirin poisoning using similar tactics. Any problems resulting from product use were the fault of the individual, not the product; in the case of aspirin, this meant poor parenting.