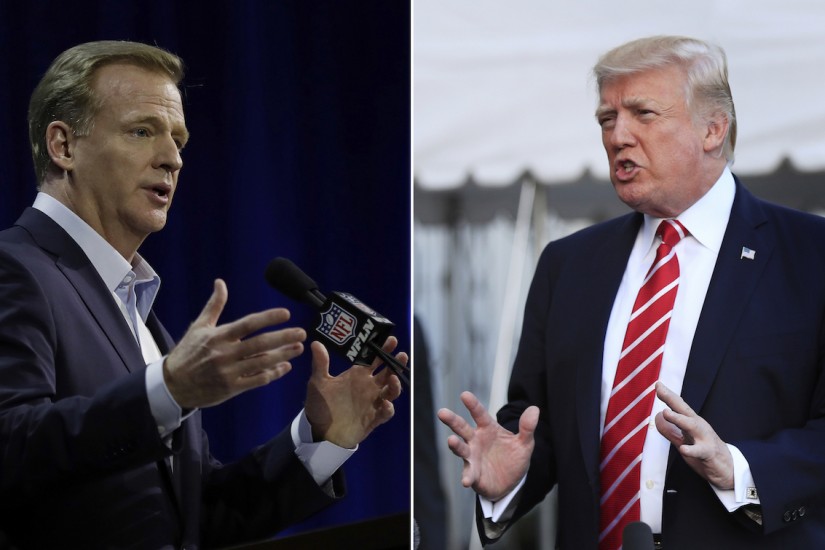 At left, NFL Commissioner Roger Goodell answers questions during a news conference for the Super Bowl 51 football game in Houston on Feb. 1, 2017. At right, President Donald Trump speaks to reporters at the White House in Washington on Oct. 7, 2017.
File/AP Images

Unfortunately, there is no evidence to suggest that Roger Goodell is possessed of the political courage that distinguished his father.

The National Football League commissioner has bent to political pressure from a Republican president and a right-wing crusade to punish freedom of expression. Specifically, Goodell has rolled out a new policy that requires “all league and team personnel” who take the field before NFL games to “stand and show respect for the flag and the [National] Anthem.” If football players do not obey—and take a knee to protest systemic racism—Goodell will “impose appropriate discipline” on Americans who exercise their right to express their views.

President Trump, who for the better part of a year has been agitating for the punishment of players who protest against police brutality and racism, was pleased. He said Goodell and the NFL owners he represents “did the right thing,” and then the president upped the ante by announcing that “You have to stand proudly for the National Anthem or you shouldn’t be playing. You shouldn’t be there. Maybe you shouldn’t be in the country.”

Trump knows nothing about the values that underpin the Constitution he swore an oath to protect and defend, let alone the basic premises of the American experiment over which he temporarily presides. But Roger Goodell should know better.

Goodell is the son of a man who risked, and ultimately lost, his US Senate seat when he protested against the policies of another Republican president. The story of the elder Goodell’s struggle provides a stirring example of intellectual integrity and honest patriotism—precious commodities that are in as short supply today as they were a half-century ago.

Charles Goodell was thought of as a reasonably conservative, if reform-minded, Republican congressman from upstate New York in 1968, when New York Governor Nelson Rockefeller appointed him to fill the vacancy created by the assassination of Senator Robert F. Kennedy. The new senator was expected to be a relatively predictable ally of incoming Republican President Richard Nixon.

That did not turn out to be the case.

Senator Goodell entered the national spotlight as an independent Republican who was willing to take on his own party’s leadership—especially on the issue of the Vietnam War.