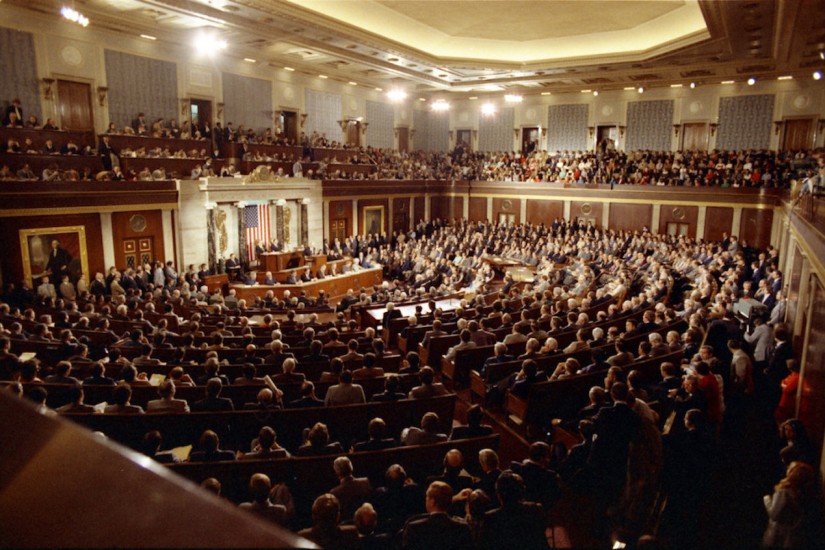 The floor of the House as President Gerald Ford delivers the 1975 State of the Union address.
National Archives/Gerald Ford Presidential Library
…

From the moment they arrived in Washington, they were labeled the “Watergate Babies,” a derisive sobriquet suggesting immaturity and self-centeredness. In truth, surprisingly few members of the Class of ’74 cited the modernizing of the Congress as a central motivation in their decision to run for Congress. In interviews with over 40 of the Class’ members, both Democrats and Republicans recalled that they aspired to change national policy: on energy, on the environment, on issues affecting women and minorities, and especially, on Vietnam.

After years of Watergate drama, voters in 1974 sent a message that they wanted to purge corrupt and unresponsive politicians—particularly those who’d aligned with the Nixon White House. In California’s conservative Orange County, “Watergate made it possible for me to win” with 56 percent of the vote, remembers Jerry Patterson, a Class member. Paul Tsongas in Massachusetts and Les AuCoin in Oregon became the first Democrats to win their seats in a century or more. The tidal pull of the election was so powerful that it swept along candidates with unusual backgrounds: Bob Krueger, a Duke professor and Shakespearean scholar with an Oxford Ph.D., won in Texas despite a decade’s absence from his district, while Eddie Beard was a Rhode Island house painter who had never left his hometown.

Especially significant were Democratic victories in the former Confederacy, a region where the number of Republican House members had quintupled from just seven in 1960 to 34 in 1972. In the aftermath of the civil rights movement, Kevin Phillips had predicted in The Emerging Republican Majority (1969) that these states would boost Republican fortunes in competing for House control; but in 1974, Democrats won back nine House seats in the region, swelling the number of Southerners in the caucus to 81. The wave was so formidable that in Georgia, the ultraconservative Democrat Larry McDonald, a newcomer who had been briefly jailed for failure to pay alimony just a few months before the election, narrowly defeated a former Vietnam prisoner of war.

The new freshmen Democrats were generally young, mostly male, and almost exclusively white. Overall, 87 members of the Class were under the age of 40, shaving two decades off the average age of House Democrats. Many newcomers were in their early 30s or even 20s and more closely resembled long-haired college students than national legislators.