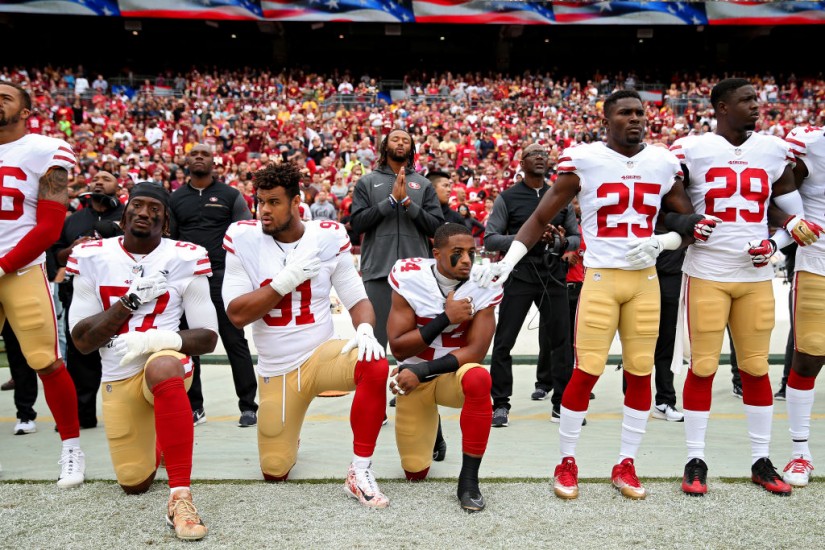 Members of the San Francisco 49ers kneel while holding their hands over their chest during the U.S. national anthem before playing against the Washington Redskins at FedExField on October 15, 2017.
Patrick Smith/Getty Images
…

Last season, during the playing of the national anthem, dozens of NFL players kneeled, locked arms and raised their fists in protest against police and state-sanctioned violence inflicted upon African-Americans. Their actions elicited a fierce backlash, much of it fueled by President Donald Trump, who encouraged his overwhelmingly white base of supporters to boycott the NFL so long as players, in his view, continued to disrespect the flag. Seeking to avoid further controversy, on May 23, Commissioner Roger Goddell announced that for the upcoming season, “All team and league personnel on the field shall stand and show respect for the flag and the Anthem.” Not following this directive could result in teams being fined and players subject to “appropriate discipline.”

Approximately 70 percent of the players in the NFL are African-American. They have also been the most visible faces of the national anthem protests, which began in 2016 with quarterback Colin Kaepernick, who is currently unemployed and suing owners for collusion to keep him out of the league.

I see the decision by the NFL as an unmistakable attempt to police the actions of its majority black work force, impose what amounts to a loyalty oath, and enforce through intimidation and threat a narrow definition of patriotism. The message is clear: Either demonstrate unqualified devotion to the United States or be punished.

African-Americans confronted the same stark choice during World War I.

In previous conflicts, African-Americans had sacrificed and shed blood for the nation. But patriotism alone has never been enough to overcome white supremacy. By 1917, as the United States prepared to enter the world war, disfranchisement, Jim Crow segregation, and racial violence had rendered African-Americans citizens in name only.

Black people thus had every reason to question the legitimacy of fighting in a war that President Woodrow Wilson declared would make the world “safe for democracy.” African-Americans immediately exposed the hypocrisy of Wilson’s words, while also seizing the opportunity to hold the United States accountable to its principles. They did this, in part, by serving in the army, as some 380,000 black soldiers labored and fought to not just win the war, but to also make democracy a reality for themselves.