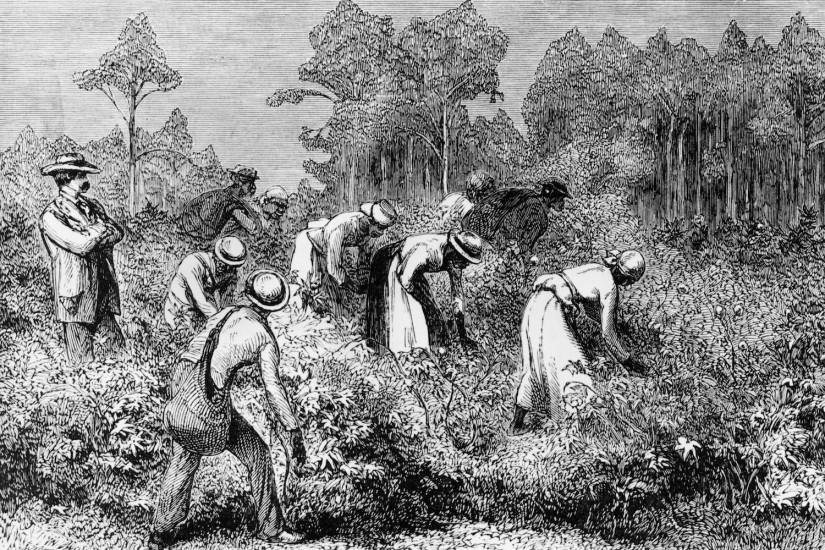 A white landowner overseeing black cotton pickers at work on a plantation in the southern USA, circa 1875.
Hulton Archive/Getty Images
…
At the center of the battle over slavery’s memory is a question: How much truth about their ancestors can the descendants of enslavers bear? Perhaps the clearest answer is found in the presentation of plantations today, or what Edward Baptist argues ought to be called slave labor camps. Neils Eichhorn, writing in The Journal of the Civil War Era, recalls one tour guide referring to enslaved people as “servants” and “like family.” A study by David Butler surveyed 1,000 tourists at Laura Plantation in Louisiana. The groups most interested in learning about slavery are foreign-born whites and, secondly, black Americans; white Americans were interested in almost anything but slavery. “Few things troubled white Southerners more than the notion that their ancestors had actively engaged in the sale of men women and children and facilitated the destruction of families,” write Kytle and Roberts.
On such tours, visitors will rarely get to see the physical reminders of slavery—the dwellings and other buildings where enslaved people lived and worked. There is no record of how many slave cabins remain, according to preservationists, since many that may exist would be on private property and others were recorded, and forgotten, as “minor buildings” on the National Register of Historic Places. Stephen Small, an African American studies professor at Berkeley, has conducted research on slave cabins since 1995 in eight states and estimates merely several hundred remain from “an original pool of hundreds of thousands of cabins.” Some might argue that plantation owners did not always make a choice to erase the physical evidence of slavery on their property: Many slave cabins were wooden structures that were allowed to rot whereas the main house was either kept up or renovated.

Yet it is very convenient, according to Derek Alderman, founder of the Race, Ethnicity, and Social Equity in Tourism project, that such structures no longer remain. It allows tour guides to redirect visitors’ attention to the “big house” with its pristine artifacts and to avoid any mention of the terror that made all that spectacular wealth and grandeur possible. Through this process, according to one group of anthropologists studying colonial Williamsburg, the whitewashed past becomes something visible, tangible, and factual, while slavery becomes intangible and difficult to grasp. Even when slave cabins are preserved, they are not always preserved respectfully; at the Hofwyl-Broadfield Plantation in Georgia, one of the slave cabins now houses a restroom.