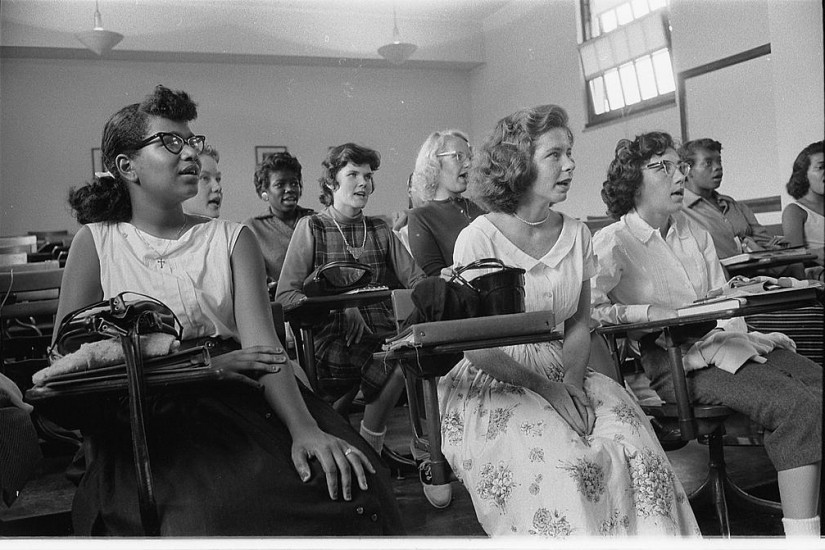 An integrated classroom in Anacostia High School, Washington, D.C. in 1957.
Library of Congress/Wikimedia
…

The case, Green v. New Kent County, was decided on May 27th, 1968, 50 years ago this past Sunday. Green marked the beginning of what we now remember as federal school integration, setting up racial conflicts that persist today. But it also announced a profound change in the Supreme Court’s thinking on race. Green quietly embraced a radical view: that the Constitution can sometimes require the government to repair the harms of historic racial injustice, even after it stops explicitly discriminating by race.

The backdrop for Green was the South’s gradual accommodation to the Brown v. Board decision. In Brown, the Supreme Court had declared that districts could no longer forbid black children from attending the same schools as white children. A period of defiance followed, but most districts eventually relented, at least to some small degree. By the late 1960s, southern school districts discovered it was easier to mitigate Brown’s effects than to defy it outright. In many places, a compromise emerged: Token integration of a few black students would be permitted, while large-scale segregation between the bulk of the black and white population was preserved.

By the late 1960s, about 90 percent of southern districts operated using something called a “freedom of choice” plan. Under this system, students were automatically re-enrolled in the same school every year, but had the option to change their enrollment if desired, which meant that a black child could enter a formerly all-white school. The hard racial barrier between schools was now permeable. This satisfied, at least in the most minimalistic sense, the requirements of Brown: No child was prevented from attending any school because of his or her race.

But there was a reason the plans were a popular substitute for Jim Crow schools: In practice, this approach tended to preserve racially divided education. Decades of segregation had left schools racially coded—everyone in a given community knew which schools were “black” and which were “white,” even if the district no longer said so. “Freedom of choice” placed the onus of integration on individual students and parents, who had to opt to cross the color line themselves, facing social stigma, and, in the case of black parents and children, enduring severe discrimination.