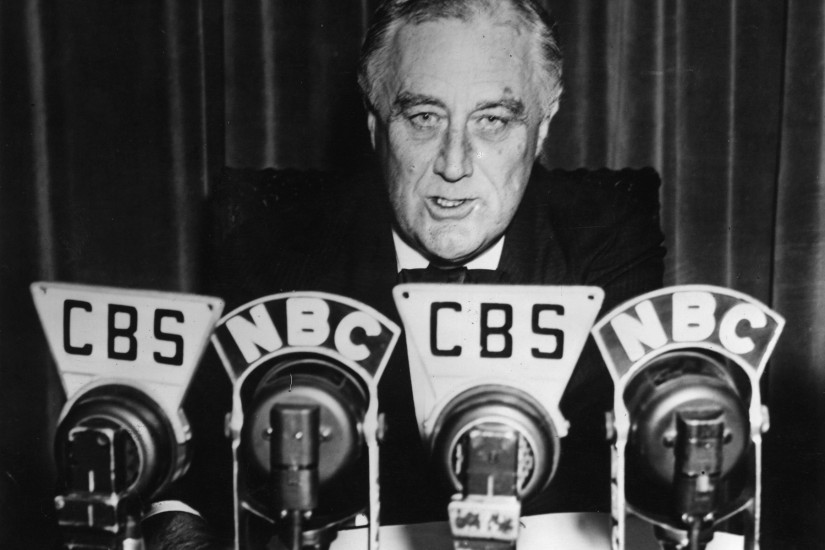 President Franklin Delano Roosevelt addresses America over a nationwide hook up in a speech on the Neutrality Bill, 1939.
Topical Press Agency/Getty Images

Donald Trump's champions and critics agree: He is rewriting the relationship between the press and the presidency. On the pro-Trump side, Newt Gingrich claims that the president's "brilliant" use of Twitter allows him "very quickly over and over to set the agenda at almost no cost," while Press Secretary Sean Spicer says it gives him a "direct pipeline to the American people." Critics highlight how Trump sidelines the press by bullying his critics, rebuffing hard questions, and favoring sympathetic outlets such as Breitbart. They have expressed alarm about Trump's call to "open up" libel laws as a means to quash "horrible and false" stories.

Another president, Franklin Delano Roosevelt, revised the media rules in equally profound ways. Like Trump, he feuded with the mainstream media; like Trump, he used a new medium as a direct pipeline to the people. He also used the government's machinery to suppress unfavorable coverage, a fate we hope to avoid in the age of Trump.

Manipulating the Media
Roosevelt, like Trump, had a good relationship with the press at the start of his public career. Journalists found him quotable and amusing. But by 1934 this honeymoon had frayed, and a year later it had given way to a war of words. Roosevelt complained constantly about the press's "poisonous propaganda." With a tone of mock sympathy, he reassured reporters that he understood they were not to blame, because publishers told them what to write.

In the 1936 election, Roosevelt claimed that 85 percent of the newspapers were against him. In the standard work on the subject, historian Graham J. White finds that the actual percentage was much lower and the print press generally gave FDR balanced news coverage, but most editorialists and columnists were indeed opposed to the administration. Convinced that the media were out to get him, Roosevelt warned in 1938 that "our newspapers cannot be edited in the interests of the general public, from the counting room. And I wish we could have a national symposium on that question, particularly in relation to the freedom of the press. How many bogies are conjured up by invoking that greatly overworked phrase?"